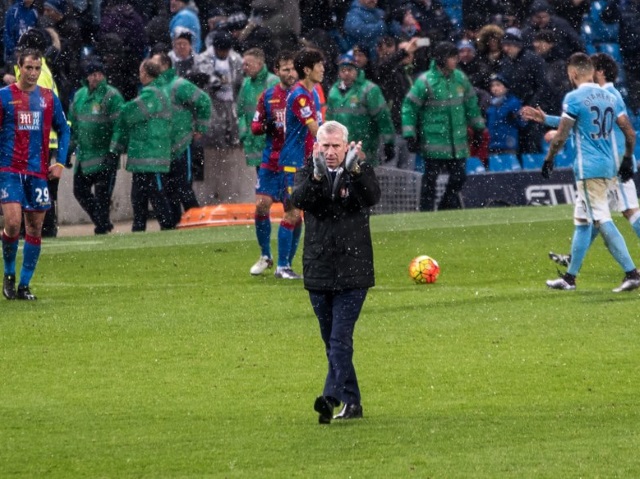 Having decided to not repeat my away day diary of last year, I have not contributed to the FYP website with the previous degree of frequency, but Palace's current bad run has driven me to the keyboard (suppose that is better than a whisky bottle). There are five things, which I think would help us snap out of what is clearly now a mid-season slump:

Unless (until?) we can afford a world-class goalkeeper, our goalkeeper for the foreseeable future is Wayne Hennessy. Right now, however, we need Julian back. Given our lack of goals we simply cannot concede goals so easily due to basic goalkeeper errors.  We were not playing badly against Man City on Saturday, but the concession of that first goal killed us.  I had a depressed train journey home from the Etihad sitting next to a Man City supporter who commented that it was unusual for City to take so many shots from distance and that clearly the players had been told to shoot on sight due to the Hennessy's vulnerability.  Well it clearly worked and we cannot allow that situation to continue. Our back four are very used to playing with Julian and he would slot in very easily. Julian has done nothing wrong to lose his place, and the pressure of coming back in now would not faze him in the slightest (his heroics in the 2013 play off final show how he copes with pressure). Besides his return would give both the players and the supporters a lift- if there was ever a player whose blood is red and blue it is Julian. Wayne can come back later in the season but right now we need our number 1.

Happily, despite our current run, we are a long way from where we in the past two January transfer windows. We do not desperately need new players to make sure we stay in the division, but if we are not going to fade away in the second half of the season, we do need some new players in. Super Al has publicly said he is only looking for forwards and we do need someone to come in and shake up our attacking options. If we can get someone that will bring us 10 goals in the second half of the season that would be magnificent, but I would be happy with some new players who just give us a different options and put some pressure on our existing first team. Fundamentally our existing attackers, including Connor Wickham, have all proved themselves as having the right quality to win matches for us, but only when they are on top of their game. The problem is our other current options (Chungy's wonder Stoke strike excepted) are not showing themselves to be real alternatives. I am not sure if the situation is so dire that we have to take a risk on Emmanuel Adebayor, but if Alan Pardew thinks he can get the best out of him without our team spirit being impacted then maybe he is worth a go. Of course, having Yala back would be a big boost as well.

3. Keep doing what we are doing

My Man City supporting travelling companion yesterday commented that unlike every mid table (and below) club coming to the Etihad, we went toe to toe to them, for pretty much the whole match. OK, the result did not go our way (just slightly), but the overall quality was good. This has been Al's 'philosophy' and we should keep it up. I might be saying something different if we are still on 31 points in March, but for now I would hate for us to go backwards in our development by relying two banks of four and counterattacks.  As an aside, I am sure I am not the only person to think this, but I have now had longish conversations with Man City supporters after matches and they have always been magnanimous and a pleasure to talk to, win or lose. I cannot say the same thing for the supporters of all other clubs.

4. Get behind the team

I suppose it is hardly surprising, but Saturday was the first away match I have been to where we were comprehensively out sung by the home supporters. Two seasons ago were out singing home supporters both in volume and wit) even when we were losing (Liverpool in October 2013 being a classic case). I know it is hard to keep it up season after season particularly when the novelty of visiting places like the Etihad has worn off, but that quality of support is part of what makes Palace what it is. Of course, it does help if the team is giving you something/anything to get excited about. At least I have yet to hear any booing either home or away.

5. Let's not get too depressed

No one enjoys a bad run and this is certainly the worst we have had under Alan Pardew, but we should not forget where we were at this point in the last two seasons. 31 points at the mid way point is still a great achievement. This is the first season since 2008-09 (ignoring our promotion season) where logic (and statistics) means relegation should not be a worry. On the one had that is fantastic in terms of not anticipating every match as being critical to our survival, but it does mean that both the supporters and the players need to find the motivation from somewhere to perform at our best.  I hope we collectively find that motivation from somewhere so that we do not have to fall back on relegation fear in March/April to push us over the line.

They say that writing can be a form of therapy and it has made feel a little better writing this, although 3 points from somewhere would make me feel even better!