Why Emmanuel Adebayor could be the right signing for Crystal Palace 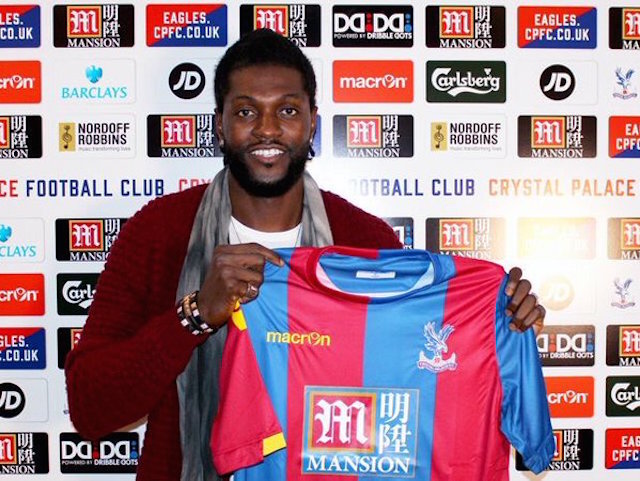 Making his FYP debut is Jay Crame, editor of The Eagles Beak, on why the former Spurs man could be perfect for Palace.

The January transfer window is just full of frustration for football fans. Your club signs a player in good time and it is not the one fans want.

Leave the signing of players until deadline day and fans are at the end of their tether having spent the previous thirty odd days waiting desperately for news like an expectant father (although I would not want to be that father waiting that long during labour let alone the mother!)

Do not sign a player at all and the fans are up in arms. It is a no win situation.
You can probably tell that I really am not a fan of the transfer window along with Jim White’s exaggerated dulcet tones and his yellow tie. It is a media wet dream and if social media is anything to go by, it is solely responsible for breeding so called accounts and groups that are allegedly ‘in the know’ that all too many people believe. My Mum knows more than any of these self-confessed experts, I am sure of it.

Now I have had my rant, I turn my attention to Palace and what is now a much more urgent need for a striker before White toddles off to see in the window slam shut live from the bongs of Big Ben.

It is no secret that Palace have been lightweight up front this season. We have scored goals but it has been from the rest of the side. The defence has scored more goals than the striking department so far. Connor Wickham, Frazier Campbell, Dwight Gayle, Marouane Chamakh and an all too brief cameo by Patrick Bamford has totalled a massive ONE goal to date.
With the FA about to throw the book at Connor Wickham for his ill-advised swing of his elbow into the face of Belgian defender Jan Vertonghan on Saturday, I would be surprised if he gets away with anything less than three games out with immediate effect.

That would see the former Sunderland and Ipswich Town striker miss games against Stoke City, Bournemouth and Swansea City in the space of seven days. It would sum up his stop start season with us since signing. Two spells out through injury and now facing time out through suspension. It is a real shame as the team has looked a much better outfit with him leading the line as the lone striker. The problem we face is when we have to replace him.
None of the current personnel fit the mould to our current formation. While we continue to miss Yannick Bolasie, boss Alan Pardew has eluded to the fact that he would not be adding to the defensive or midfield ranks. It is the attacking department we need help with, especially goals.

There has been much speculation, as there always is, about who Palace will be signing. All the usual suspects have been linked such as Charlie Austin and Loic Remy but there are two more which have caused quite a divide among Eagles fans.

The self-confessed fruit cake that is ‘Lord’ Nicklas Bendtner is currently plying his trade (if you can call it that) at German outfit Wolfsburg. He is looking a less than likely option now but the other one is very much on the cards if reports are to believed.

Missing Connor Wickham through suspension has perhaps pushed the club towards the direction signing of free agent Emmanuel Adebayor. A striker who is not the first to have admitted to falling out of love with the game and only playing for the money. A player that has an over inflated ego and previously caused problems at former employers.

Palace need a player to compete for that lone striker role with Wickham and when he is not available, then the position is his. Step forward Adebayor. Question marks over his match fitness are a concern, as are his personal views and attitude towards the game of football. However, facing facts, this is a player that has scored goals at the very top level.

Everywhere he has been, he has scored goals. From Metz where he began his career to his last club Spurs as well as on international for Togo. In over 360 appearances for various clubs that include Monaco, Arsenal, Manchester City and Real Madrid, he has netted over 130 times.

The 31 year old striker only appeared for Real Madrid fourteen times but managed 5 goals in that time. That is a similar run of games he could feature for Palace between now and the end of the season should he sign. Five goals could be of real value but it is not just that. The all round play of a big lone striker will bring the midfield into play. This is a player with an awful lot of experience.

While I am not completely convinced, I remember very similar feelings towards the signing of Marouane Chamakh and that did not work out too badly.
The signing of Adebayor until the end of the season could well be a gamble worth taking.

Jay Crame is editor of The Eagles Beak, a brilliant website for news and views on CPFC - check it out here.