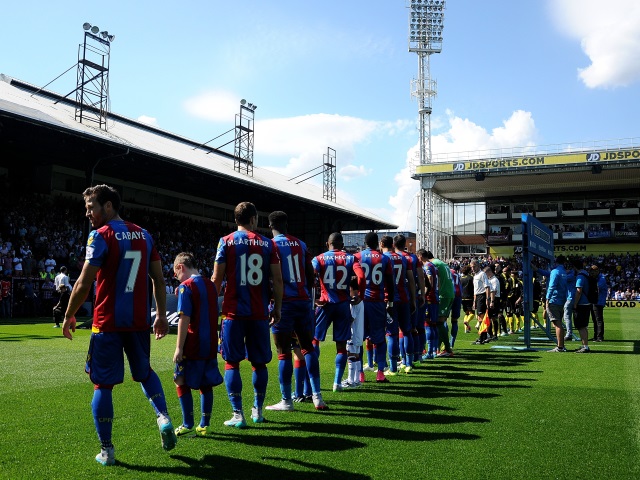 1. The rot looked like it had really set in

Palace wavered listlessly from the kick-off today - and in the aftermath of Gilfy Sigurdsson's impressive free-kick - it looked like that rot we had all talked about had well and truly set in. That defensive resilience we were all so proud of prior to the crazy run of defeats had dissolved, leaving a side that was bereft of organisation and aimless in its approach. For 20 minutes, the Eagles toiled. More of the same for the rest of the match would doubtlessly have resulted in serious questions being asked about just how Palace could get out of that rut. But, with a tactical switch (the ineffective Jordon Mutch moved to the wing, taking an even worse Chung Yong-Lee's place) Palace suddenly found their feet and the half ended with some reasonable approach play. It's to Palace's credit (and Pardew's) that the side played with a much greater level of intensity, inventiveness and organisation. Mutch made a greater impression on the wing; Marouane Chamakh brought a little more composure to the side - and so the run of defeats came to an end. That rot that we're worried about needs a bit more treatment, though. A win soon should do it.

Pape Souare's positioning was questioned after the Bournemouth result in this feature - and there are still some concerns - but his frailties weren't helped by the completely ineffective performance from Lee. The South Korean international has many attributes which Palace could make use of - but defending is not one of them. Souare was exposed on multiple occasions, with Swansea doubling up against the left-back at every opportunity. On most of those occasions, Lee would stroll back, barely putting pressure on the full-back (his marker) as he ran past. The tactical switch which saw Mutch take Lee's place on the wing made an immediate impact to our defensive game - there were still some attacks down the left - but Mutch at least put the effort in to get himself in the way. The change also made a difference in an attacking sense, as Mutch made a greater use of the ball while in possession.

It was arguably a little too soon for Emanuel Adebayor to start today's match -- he's still a little rusty and lacks that match-fitness that you need in the Premier League. However, for all the lack of match action, he put in an excellent shift which saw him make a massive nuisance of himself throughout. For someone as gangly as he is, he certainly has a physical edge that defenders hate dealing with. After Palace's equaliser, there was also an excellent spell of play in which he, Mutch and Ward worked well together. It's also worth noting that he had a vision for passes that we've lacked - he put Wilfried Zaha clear on a couple of occasions with excellently timed, brilliantly-executed passes. By the time he went off, Adebayor had tired - but there's a lot to be pleased about. A few more games will see that talent shine.

4. At such a critical time, it's easy to get sucked in

Negativity is poisonous. It feeds anxiety. Makes you angry with the slightest of errors. Makes you question the logic of those entrusted with making decisions. Makes you rant at the undeserving. At 1-0 down to Swansea (and when Palace went 2-1 down to Bournemouth, too) I found myself poisoned by that negativity. That anxiety that I was feeling was displayed on the pitch. You can sense it at the Liberty Stadium, and you could sense it on Tuesday as Palace lost to Bournemouth. I got sucked into that. I ranted at every defensive error. Groaned at every misplaced pass. Questioned the line-up, the goalkeeper, the left-back, the winger. It's so easy for that to get a grip of you; for you to get sucked into that void of frustration. Scott Dann's goal - for whatever reason - seemed to plug that void. It seemed to release some of that pressure - and you could feel it. In the crowd and the players. And in the manager, who - at the the full-time whistle - strode towards the away fans with clenched fists. 43 days without a point took their toll on all of us.

Hiram Boateng was Crystal Palace's first academy debutant in four years and 16 days (thanks to Matt Woosnam for that stat) when he played for the last 18 minutes of the match. The centre-mid could have had a remarkable debut with a run and shot that was deflected narrowly wide of the post - and for most of the 18 minutes, he did what was required of him. There will always be a lot of pressure on young players to succeed - we want to see our own players in the side. However, the best thing we can do as fans is not to be too analytical in our appraisal of their performances. There is a steep learning curve for most players who encounter the Premier League for the first time - more so for players who've played just a limited number of games below the Championship level. The only way Palace can really judge if a player is capable of making that jump is by giving them the springboard to do it. Boateng has the application - he wouldn't have been on the bench if he didn't have it - now he just needs more time. That might be out on loan, or it might be with fleeting performances for Palace. Either way, it was great to see him feature.
Follow Rob on Twitter.
Tweet
back to top
Tweet