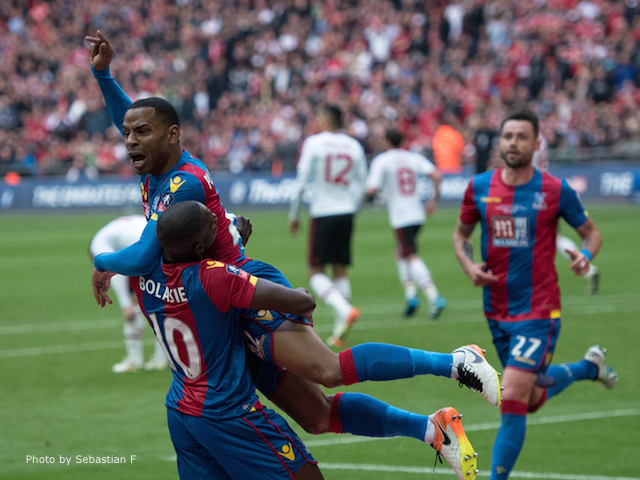 It’s been almost a week and still, this one hurts. This one really, truly hurts.
Sometime on Sunday Cruddy Sunday, I forced myself to endure the ‘highlights’ of our adventure to Nearly Nearly Land. Only way you’ll start to get over this, the lone functioning quadrant of my brain told the misery-swamped remainder. First stage of the grieving process. Suck it up, tear off the plaster, begin to move on.
But critically, and foolishly, I resolved that it would be a good idea to watch all the cup final’s major plot points unfold in reverse. United lifting the trophy (deep exhale). Lingard’s rocket-shoed winner (sharp wince). Smalling’s rugby-tackle rouge (blank stare). Mata’s pinball equaliser (guttural moan). And, finally, Puncheon’s stalemate-breaking goal. I figured that saving the best bit ’til last would transform this most dark of moods, the happy memory of Saturday’s standout moment airlifting me away from a sea of all-encompassing gloom.
Instead, it was the most painful part of all.
To fully grasp why, you have to relive that sensational moment, and the build up to it. 77 minutes and 35 seconds in which we’d hung on with frayed nerves and desperate hearts, our occasional upfield venture easily quelled, United dirtying the paintwork of our goal frame twice, Hennessey’s unclipped fingernails all that stood between us and a Mata opener. This far in, overwhelmed by the raw emotion of it all, I’d not enjoyed a single second of the actual football. The wall of uproarious noise, the relentless surges of colour, the sensation that we were all a tiny-yet-crucial part of one heaving, collective mass: beautiful. Every kick, throw and deflection of the evil little bastard globe at the centre of it all: agony.
And then. AND THEN. That 78th minute. Well into ‘any goal now wins the day’ territory. A flat-but-firm Jason corner from the left, arrowed towards Dann but too close to Smalling and Fellaini. The bountifully-coiffed Belgian, all 6 foot 12 elbows of him, rising to head clear. The ball dropping to Ward in the second phase. A hopeful, half-volleyed, caressed chip-and-chase towards the back post. Mata napping. Martial playing everyone onside. De Gea not quite paying attention, arm stretched skywards in the hope of an assistant’s flag that would never come.
Puncheon.
Touch.
Volley.
Goal.
Bedlam.

Actually, even bedlam is an understatement. Everyone, everywhere, completely losing their shit. Me keeled forwards, slapping the back of the seat in front, bellowing all the swear words I know at everyone and no-one in particular. My little brother, next to me when the goal went in, materialising halfway down our row, bouncing on a seat with both feet like it’s a trampoline. I’m shocked he doesn’t fall, amazed it doesn’t snap. Strangers hugging one another and raising fists in unison and laughing and crying and no one knowing what to do or say other than sway and shout and – at last, at last – believe.
For the first time that unified, ecstatic mass – you, my little brother, me, 28,497 others – collectively know we can do this. Holy shit. It’s the FA Cup Final. We are in the FA Cup Final. We are WINNING in the FA Cup Final. WE HAVE NEVER WON ANYTHING. WE ARE GOING TO WIN SOMETHING. WE ARE GOING TO WIN THE FA CUP FINAL. HOLY SHITTING SHIT.
We love you, and whoa whoa whoaaaaooooo, and stomping, and delirium, and how can anyone try to write sentences to describe this bit because there are no sentences in the English language with which to do it. None. And anyone reading this thinking ‘shut up soppy bollocks, it’s just a flipping football match’, he or she will never understand. It’s not just a football match. Palace, to us – sod what the outsiders think – isn’t just a football club. It’s an identity. It’s an ideology. South Londoners are a proud, protective bunch, and Crystal Palace FC and South London come intertwined. In that instance, in those three minutes, South London is the centre of the universe. That’s how colossal this feels.
The goal, celebration, rendition of We Love You – together it’s the sound, the feeling, of release. After weeks of ‘can we do it?’ tension, after 26 years of bottled-up what-ifs. It is glorious and it is uplifting and it is suddenly, potentially the defining moment in Palace history. Technically there was more at stake at Stockport and Sheffield Wednesday, in Cardiff versus West Ham or during that first Wembley dalliance with Watford, but ultimately league football is cyclical. We’ll get relegated again, we’ll get promoted again. You and I, we might never have this again. Our children, or our children’s children, maybe, maybe. But you and I, this set of players, Mile and Damo, Joel and Jules, the men who rekindled a roaring flame in a club reduced to ashes six years ago, this is it. For them, for us, This. Is. It.

We can taste it. We are eleven minutes away. Until now, it was a fantasy. Now, we believe. We are ten minutes away. It’s written. One of our own scoring the winner. Mile lifting the cup. It’s on. It’s happening. We are nine minutes away. It is entirely fucking wonderful. Crystal Palace’s name, etched in history. Pride of South London. Toast of the footballing world. We are going to do it. We are going to do it. We are going to do it.
Except Rooney is running.
No one is tackling Rooney.
Rooney is still running.
No one is tackling Rooney.
Rooney is crossing.
No one is blocking Rooney’s cross.
Fellaini is leaping.
No one is in the way of the ball as it drops off Fellaini’s shoulder.
Mata is shooting.
No one is marking Mata.
No.
No.
No.
No.
No.
It is over, a slow-motion mutilation, that roaring flame snuffed out – for now – as easily as a candle on a birthday cake. The balloon is popped. The world is spinning again, and we’re no longer its axis. Came so close. Nine minutes. Nine bloody minutes. It might as well be nine million light years.
No.
No.
No way back. At least, not today.
Rest assured, I’m categorically not here to throw a pity party, nor to cast us as victims. We're not a club that requires trophies for validation, and nor would we wish to be. We don't declare ourselves entitled to win silverware because of crowd numbers or noise or other club’s apparent failings. We never, ever called ourselves 'FA Cup Ready’.
We are Palace, super Palace. Stand in the rain and stand in the sun. Here we are, you’ll know us by the noise. Where they play we’ll follow, we’ll follow, we’ll follow, we’ll follow. You know it’s true, bleed red and blue. And like our representatives on the pitch at Wembley in those first 78 minutes, we'll bend but not break. I know this. I’m proud of this. We are defined by red and blue, not silver.
But that Puncheon goal, that Puncheon goal. Like an old VHS recorder on which the stop button no longer works, every replay of it in my mind ends with the Mata strike that wiped it out. I can’t separate the two, can’t pretend the three minutes in between never happened, can’t let go of that feeling of total jubilation. Most of all, can’t handle that there’s no way of getting it back. Sex, drugs, alcohol, 2am raves, all of these things at the same time, whatever your vice, there’s no way of restoring it. That was the high of a lifetime. And the final whistle, the lifting of the trophy, they’d have been even better. And now it’s gone. All of it. Ashes and wicked whispers. Embers and beautiful illusions. Dreams and dust.
I know we’ll go on, loud, unbowed, resourceful. I know time will heal. But I don’t know that I’ll ever get over that moment, that heavenly split-second when ball struck net, and the memory of the two minutes and 55 perfect seconds that followed. When you've supped from the golden chalice, if only for an instant, going back even to pricey Premier League champagne seems like a significant downgrade. It’s a taste I’ll never forget, and always miss. Though granted, I do console myself with the fact that it's better than pretending to be pissed on tap water. Let’s all agree to leave that to residents of BN1.
Tweet
back to top
Tweet