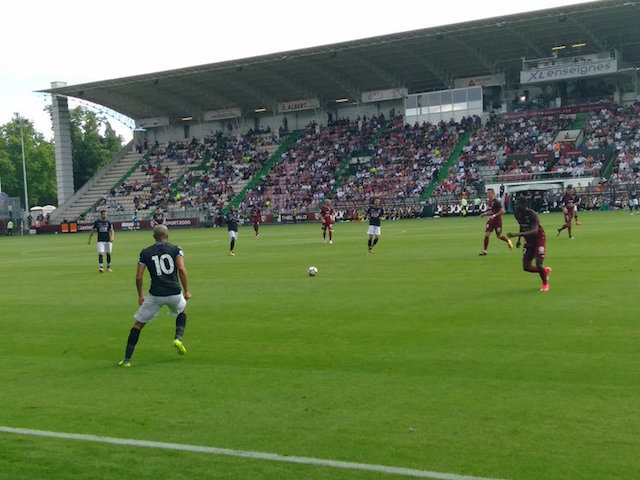 Benteke is heading in the right direction

One of the concerns that became apparent following the club's trip to China was the lack of service in to Christian Benteke. The Belgian striker looked a little forlorn in the lone striker role and with his teammates struggling to provide him with the kind of passes and crosses he thrives on, there was some suggestion that he might not suit the new manager's approach.
But Saturday's draw with Metz should have helped to allay some of those fears. Benteke hit the bar twice and headed wide late on, too. The sharpness isn't quite there but with the right service he's clearly a major threat. It's up to Frank de Boer to make that work.
Embed from Getty Images

Lokilo to get a Look In?

One of the surprise inclusions in Palace's starting line-up was that of Jason Lokilo, the young Belgian attacker signed from Anderlecht back in September 2015. Lokilo hasn't really been on the radar (not publicly at least) so his performance won't have done him any harm.
While it took him a little while to settle in, Lokilo allowed the early nervousness to fall away and made some positive contributions throughout the rest of his appearance. Composed on the ball and always eager to receive it, he managed to keep the ball under pressure and had a good eye for a pass too. His strongest attribute was undoubtedly his set-piece taking, which put Metz under pressure a number of times.
He won't have done his chances of further appearances any harm with this performance.
Embed from Getty Images

The Team is Taking Shape

Following Palace's defeat to Liverpool, it seemed that Joel Ward might feature as part of the central defensive three rather than as a full-back. But with two more games gone, and with the defender only making a 45-minute appearance in midfield vs West Brom, it appears that the Ward-at-CB experiment has come to an end.
The shape of the side is showing, though. It's likely that we'll see Andros Townsend feature as a wing-back rather than part of the front three. It's clear too that de Boer isn't entirely convinced as to who should play the supporting role to the Benteke and Zaha attacking unit. It seems that he also likes the look of Jason Puncheon and Ruben Loftus-Cheek in the centre.
Pre-season is about fitness but also about gradually working out the best line-up. Palace aren't quite there yet but that it's clear that de Boer is going through a process of deduction to find his starting eleven.
Embed from Getty Images

Recruitment is Still on the Agenda

Palace's need for another centre-back recruit is becoming apparent from the selection of Luka Milivojevic in the back three for a second successive game. The midfielder, who made such a telling contribution in the centre last season, hasn't looked too out of place in defence either.
Milivojevic made his preference to play in midfield clear in the post-match interview following the West Brom match. De Boer has also made it clear that, while he feels the team needs him in the back three, that's where he'll pick him.
If Palace are going to prioritise signings, it seems that defence and attack are the most likely to be at the top of the list. A goalkeeper is definitely needed but de Boer will still be concerned with the outfield and the lack of depth in those areas -- especially in the front line.
Embed from Getty Images

Scott Dann hasn't had the easiest of years with Palace. A difficulty in adapting to the captaincy, a prolonged injury spell and a drop in form all contributed to the belief among fans that the defender might just be on his way out.
However, in his first appearance for de Boer's side, Dann looked like a player that would suit the new manager's style. He showed comfort in possession, appeared well-versed in the need to pass the ball rather than to hit it long, and didn't rush into challenges.
If Palace do sign another centre-back, the competition will be between Dann and James Tomkins as to who will partner Jairo Riedewald and the potential new recruit. On this performance, it might well be Dann.
Tweet
back to top
Tweet