Palace's Pre-Season - A case of Optimism, Caution and Concern 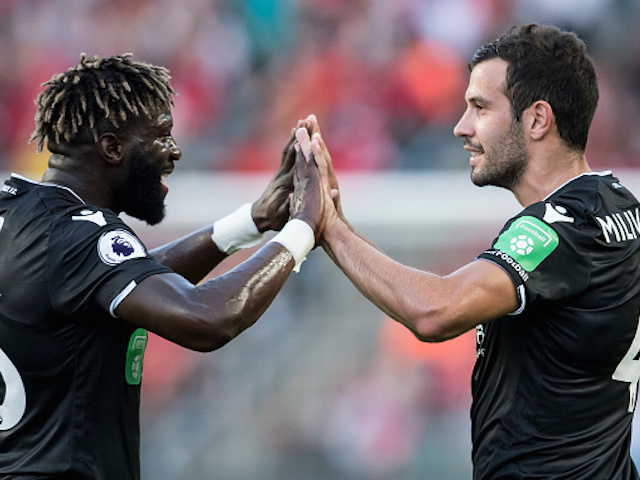 The old adage about pre-season is that as long as the players are fit for the first game, it has been a success. However, with so much coverage and scrutiny of pre-season games at this time, coupled with the ever shrinking break between seasons in the top flight (with international fixtures being played in June), perhaps this pre-season for Palace leaves fans with a mixture of cautious hope and unanswered questions.

Unlike Tony Pulis’ departure, Sam Allardyce left Palace ample time to replace him and the club took that time. Frank de Boer arrived and the four games he has overseen thus far have shown a very evident change – most notably the formation being 3-4-3 and the players’ use of the ball being more measured.

The reasons to be optimistic

There are a few. The recruitment, albeit of just two players at the time of writing, has been in tune with what De Boer spoke of when he arrived – strong, technical and young. Jairo Riedewald looked assured on the ball and has some recovery pace, allowing for some errors which a young defender new to the Premier League is bound to make. Ruben Loftus-Cheek is a powerhouse in the centre of midfield with a touch and eye for a pass meaning he is ideal as part of a two-man central midfield.

It should not need to be said but the value of Wilfried Zaha is also recognised by the new manager. Part of the reason for switching formations has been to free up Wilf, have him tracking back less and moving away from the wings when the game dictates. It will take time to be effective but it is a move managers have been making for some time (Ferguson did it with Ronaldo at Manchester United, Conte with Hazard last season, Bale at Real Madrid) and while Wilf is not at their level, on a Palace scale, the move makes sense.

De Boer has also not been afraid to use and empower some younger players this pre-season, with Jason Lokilo the main beneficiary. The young winger showed an application with and without the ball against Schalke and impressively was put on set-piece duty showing the extent to which he has worked with the first team. Time will tell if he can make the step up to Premier League player, but that he has been given a chance is a positive sign.

The reasons for caution

There have only been four pre-season games for the first team. That is not a lot of time for a new manager to establish a new formation, see if his ideas in training are being effectively implemented, see which players fit in his plans while giving as many players as possible some game time.

We have also not seen some players used in their preferred position or players have been used out of position while others have not been used. The centre of the defence is a prime example of this – with Joel Ward and Luka Milivojević used in the backline while James Tomkins and Martin Kelly, both important in the team’s revival last season have barely been seen.

While Jeffrey Schlupp and Patrick van Aanholt are both suited to playing left wing-back, it seems the manager has decided Ward cannot fulfil the equivalent duty on the right and Andros Townsend has been deployed in that role. The question again is whether that is the best use of the winger whose form towards the end of last season was a key reason we stayed up?

And while unreported injuries may have played a part as may the manager judging that some players don’t fit in to his style, until they have been replaced questions as to the lack of playing time the likes of Bakery Sako, Chung Yong Lee, James McArthur, the centre-backs mentioned above and Yohan Cabaye have had is concerning in that if they have to be used, they will be undercooked.

None of this is to say De Boer is wrong to play the players in these roles, but with such little game-time to date, caution is warranted.

The reasons for concern

While the Transfer Window remains open, there is time to address issues. However, a few days away from opening day fixture against Huddersfield and it seems that, in addition to the players being used out of position, there are a few holes in the first team.

The goalkeeping position is one which stands out. The only two contenders in the team are Julian Speroni who is a club legend who is past his best and Wayne Hennessey who was statistically one of the worst goalkeepers in the Premier League last season conceding a goal for every three shots he faced. Recruitment in this position should have been a priority regardless of the manager and that it has not been addressed is a worry.

There is a distinct lack of cover in other areas, most notable up front with Christian Benteke the only fit first team striker at the club. A striker needs to be the glue which makes the 3-4-3 work and without an able back-up, the team is relying solely on Benteke. Likewise, in the wide areas, with Townsend being used elsewhere, the options are a player yet to make a competitive appearance and the out of favour Sako.

While it is sensible to not read too much into pre-season, it is fair that while not being a one which should fill anyone with undue worry, there is a mystery about Palace even for Palace fans about how this season is going to go. However it goes, it is unlikely we will leave the rollercoaster behind.