Remembering the craziest Crystal Palace vs Brighton game ever 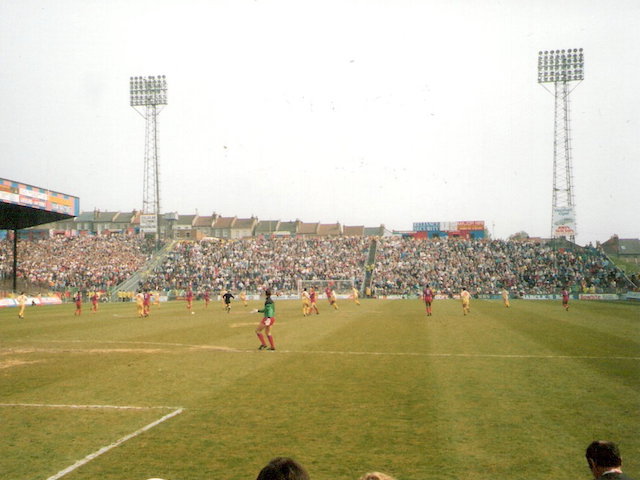 1988/89 was possibly my favourite season as a Palace fan. I was 14 when the season started and Palace was one of the most important things in my life. Hell, it was THE most important thing in my life. I never missed a match, home or away. Though we'd travel to away games together, my Dad’s season ticket was in the main stand, a seat he'd held all his adult life, whilst I opted to be with my fellow Thornton Heath urchins at the front of the Whitehorse Lane end.

Football had basically taken over my life and the fact that we clinched promotion at the end of that campaign made my teenage years all the easier, having spent years taking abuse from London based Liverpool “fans” who tried in vain to make me ashamed of my choice of team. The home leg of the Blackburn play-off game remains my favourite ever game at Selhurst Park. But another game played that season was equally as memorable.

It was Easter Monday and unusually mild for the time of year. The sun shone brightly over Selhurst Park as we entered the Whitehorse end. We'd spent pre match in Crystals, thinking we were such big men getting served Fosters tops at the age of 15. It's not as if we looked older than we were, I think it was just a case of the bar staff not being bothered as we'd never once been asked our age in there. The usual stand offs you associate with a Palace Brighton game were taking place outside but we took little notice of them. We were far too busy getting drunk on slightly diluted weak Australian lager to care. But none of us were as drunk as referee Kelvin Morton appeared to be that day.

We'd met Morton a handful of times before in the league and he was always generous to us where penalties were concerned. I think he'd given us at least two the previous season but I couldn't tell you who they were against. So he arrived at Selhurst Park already with a reputation as somebody who points to the spot quite regularly. The game started with Mark Bright putting an easy chance over the crossbar in the first minute before Ian Wright scored one of the finest goals Selhurst Park has ever witnessed with an amazing volley from an acute angle some 20 minutes later. Then shortly after this, Mike Trusson, the kind of useless, lower division clogger one associates with Brighton and Hove Albion, received a straight red for a disgraceful challenge on Eagles winger Eddie McGoldrick.

So, we've put one over the crossbar, scored a screamer and the scum have had a player sent off. And that's with barely half an hour on the clock. Too much action for one game? No chance. Trusson had barely reached the dressing room when veteran carthorse Larry May decided to give Mark Bright a mid air bear hug and Morton gave us that penalty we'd been anticipating since kick off, and Mark Bright made no mistake from the spot. Then we kicked off again. I was pretty satisfied that we'd seen everything the first half was going to offer and started to move towards the exit so I could go and have a cigarette without my dad seeing (he always made a habit of waving to me from the Main Stand before every match so he knew exactly where I stood).

As I was making my way to cover I heard the ref's whistle. “Fuck me! Another penalty?” Up steps Bright again but the Seaweed keeper saves it with his legs this time. So I start slowly making my way to the exit again, when almost immediately the ball is back in Brighton's area and it appears that one of the carthorses in the centre of the Brighton defence has poleaxed Ian Wright. Surely he's not going to give another penalty? Yep, Kelvin Morton points to the spot yet again. This time Wright steps up but his placed kick hits the post and the half time whistle goes shortly after, and I finally get to smoke my fag.

The beginning of the second half suggested that Morton was trying to even things up. For reasons known only to him, Morton decided that Jeff Hopkins shielding the ball from Brighton's Kevin Bremner was worthy of a penalty and Alan Curbishley, who’s long associations with both Brighton and Charlton make him a somewhat disgraceful specimen of humanity, drilled his spot kick to the left of Perry Suckling, giving Brighton a lifeline that they scarcely deserved.

The Palace faithful had grown rather tired of spot kicks by the time the fifth penalty of the game was rewarded. A blatant handball in the Brighton area gave Morton little choice but to take this game to a farcical level and break a record in the process. The choice of John Pemberton as the next penalty taker seemed to be an obvious one. Pembo had come close to scoring several times that season with some absolute thunderbolts from outside the area so surely he could just blast it into the net like Andy Gray used to right? Nope. Pembo put his foot under the ball and blasted it out of the atmosphere. If anyone was wondering what that spherical object photographed in Mars recently was, it was probably the matchball from that game.

Then, towards the end of the game something even more farcical happened. Having been outplayed and outclassed for the entire game, that shitbag Curbishley nearly snatched a point but fired his shot straight at Perry Suckling minutes before the final whistle. Then the whistle blew and we left Selhurst Park bemused as to why we hadn't totally annihilated our rivals. But that had to wait another 13 years.

After this game midfielder David Madden, a recent addition to the side after injuries to Geoff Thomas and Glenn Pennyfather, took on the role of regular penalty taker and scored five out of five to get us promoted, so perhaps this needed to happen but I don't think we'll ever see a game like this again. Not in my lifetime. Though this being Palace, you can never rule out the absurd. I've often wondered if Kelvin Morton was a secret Palace fan given his generosity towards us where penalties are concerned. If anyone sees him at a game, please let me know.