Where does Ebere Eze fit in at Crystal Palace? A tactical analysis of Roy Hodgson's options

A million “Announce Eze” tweets later Palace have finally done exactly that. Eberechi Eze has made all the right noises about being excited to be at Palace, being in the Premier League and wanting to entertain our fans.

For many the most interesting point he makes on his obligatory “First Interview” is being excited by the project and his position in that project. That begs the question where does a Number 10 like Eze fit in a team that hasn’t played with one for a long time?

Yohan Cabaye was supposed to be one we thought but he turned into a defensive midfielder with an eye for a pass. Max Meyer was the next but he’s never really done it for us and if the manager is to be believed doesn’t actually want to play there.

If you were to ask the layman what formation Palace play most would say 4-3-3 but since Andros Townsend’s form went off the boil that hasn’t really been the case. It’s often been more of a lopsided 4-4-2 with the only real change being where in the system Zaha plays and whether Ayew or Benteke is the spearhead. It’s certainly been the case though that we haven’t consistently played with a number 10 since Puncheon departed and even then, he was a converted winger.

Historically Roy Hodgson has always been a 4-4-2 man and back several years ago the number 10 was deemed to be the more creative influence alongside the goal scoring number 9. Modern football has morphed that role somewhat into usually being the middle man of the 3 in a 4-2-3-1 formation – this is the role that Eze has starred in while at Queens Park Rangers. Comments from their fans, who seem genuinely please for him getting a Premier League move, have indicated that were Palace to try to play him out wide we would be losing a significant part of his game – ball carrying and passing is his game and perhaps he doesn’t have the electric pace to cause a problem for the top Premier League fullbacks.

So how can Palace tweak their current system to accommodate Eze without losing the defensive solidity that we’ve based our survival on over the last few seasons. Simply you can’t – there has to be a bit of give and take and an understanding that to add in a more offensive player means you lose a defensive one but also the old adage of attack being the best form of defensive can come into play. More attacking and creative players means more possession and more attack and maybe don’t need to defend quite as much.

The most obvious formation to choose would be the 4-2-3-1 which is also the one implemented by QPR most often last season. However, there’s no getting away from it, this means 4 attacking players on the pitch. Not something Roy Hodgson has generally entertained since Ruben Loftus-Cheek and Michy Batshuayi left. 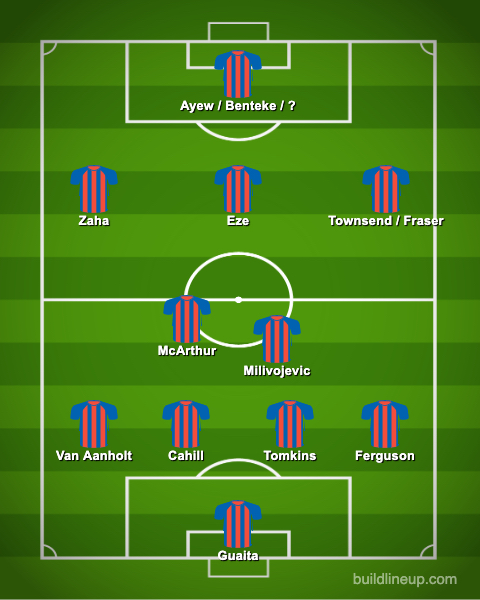 MORE: What Palace can expect from Eze - from a QPR fan's perspective

Having Eze interlink with Zaha, Townsend and Ayew sounds exciting – throw Ryan Fraser in too and that’s a lot of creative ability. Equally with a more conventional front man teams aren’t going to be able to double mark Zaha like they have done in recent years without opening gaps that Eze should be able to exploit more than our current crop of midfielders have been able to. Meyer was supposed to do that but just never has. The supply lines into that forward man could finally be opened up.

Of course, Roy might prefer to keep his 3 defensive midfielders while also trying to accommodate Eze and the way he might do that does go against Palace norms of having wide players. Four options here are the largely interchangeable 4-2-2-2, 4-4-2 Diamond, 4-4-2 Narrow and 4-3-2-1. The resources don’t change but the starting positions do. 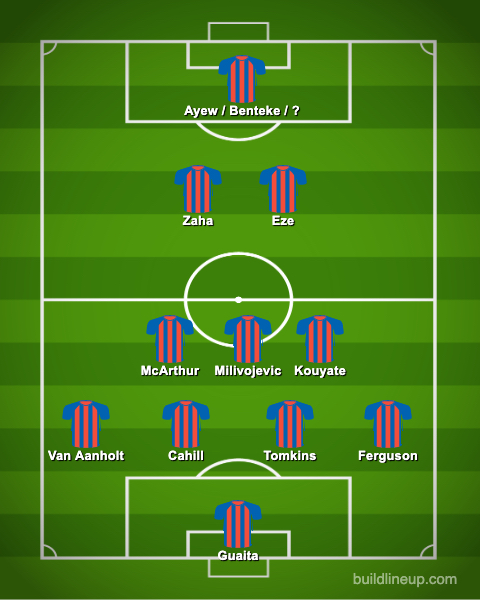 The 4-3-2-1 Christmas tree formation has largely been consigned to history but would allow the selection of 3 defensive midfielders and allowing Zaha and Eze to provide the flair and creativity to feed a central striker. The key here would be allowing the fullbacks to get forward enough to provide the width allowing the attacking players to avoid having to drift wide. While I don’t doubt that Van Aanholt (or Mitchell) and Ferguson could perform the role I’m not sure if our aged centre backs would benefit from a system that forces them into a less narrow defensive shape which has served us so well. 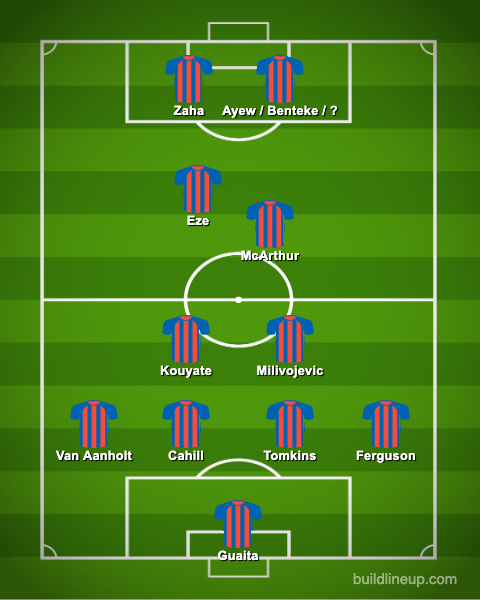 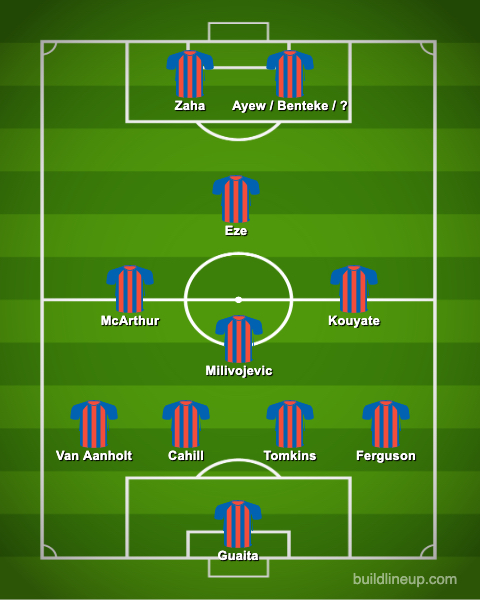 A 4-2-2-2 formation still requires the fullbacks to get forward to provide the width but allows for one of the midfielders – James McArthur or someone like a Conor Gallagher to get further forward alongside Eze. Zaha is then pushed further ahead alongside the striker. A 4-4-2 Diamond might find a balance that moves slightly more to the attacking and opens up avenues for Jeff Schlupp to come into the side on the left and a similar player on the right.

it would be fairly easy to shift between these last few formations without changing the personnel but often the choice of formation is a sign of intent. You can tell the same set of players they’re playing 4-5-1 or 4-3-3 and it largely makes no difference other than the expectation of the wide men is set as to whether you’re focussed on offensive or defensive duties – too often recently our play has been too much of the latter to the near total dereliction of the former.

Perhaps the most likely contender for a formation picked by Roy Hodgson would be the Narrow 4-4-2 with Eze occupying the same role that Ruben Loftus Cheek did. 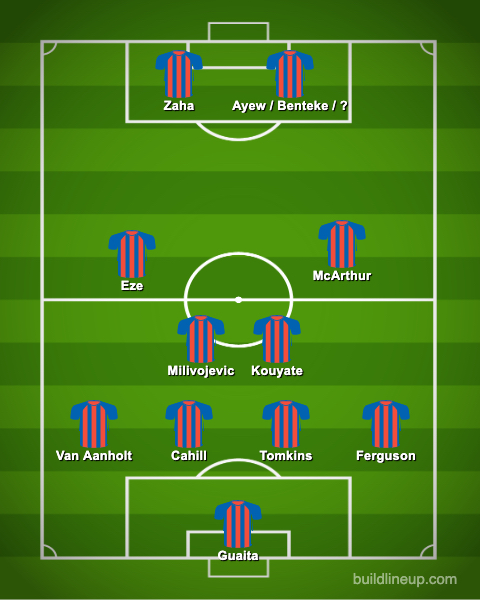 In my opinion this seems like the place we’ll probably see him play to start but also potentially the most disappointing use of his talents. RLC was the total package as midfielders go and could do it all – pushing him too far forward almost diminished his defensive abilities, eye for a long raking pass and ability to stride down the pitch but Eze isn’t the same player. When given a less central role at QPR he often went missing in games and I feel he might end up being as largely ineffective there as Meyer has been if used here.

The final wildcard formation I’ve picked is one that has often been suggested by Palace fans but once AWB left has generally been ignored due to the lack of a right-hand side option. 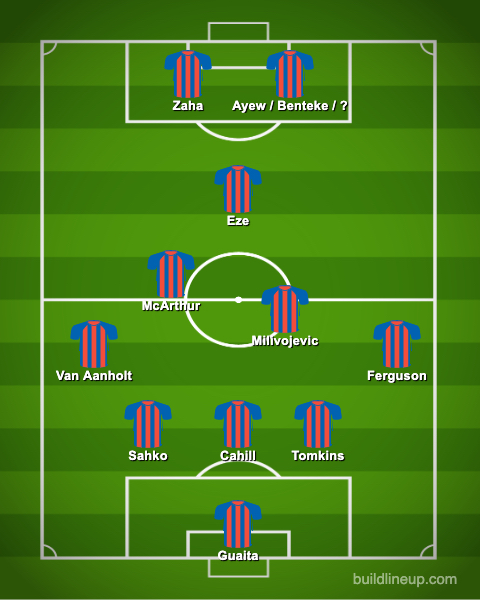 All the rage 20 years ago this formation disappeared almost completely but has had a resurrection and is used by some of the most exciting and progressive teams in the league – Wolves in particular manage to play 3 centre backs while still accommodating an exciting winger. There’s little doubt that Van Aanholt could flourish as a left wing back and if Ferguson could offer the same on the other flank we could banish worries of a slow and cumbersome pair of centre backs by simply adding another one.

Eze would fit in here ahead of the other two more defensive midfielders and provided we were able to get on the front foot he should get plenty of the ball and also have plenty of passing options made available. However, as a formation that doesn’t start with a 4, I’m not sure it’s something Roy would ever contemplate but should things change then there is definitely some merit in considering it.

In summary, we certainly have the personnel to allow us to play formations that will allow Eberechi Eze to play in a position that suits him and allows us to get the most out of him. The biggest question is whether we have a manager who is flexible enough to play one of those formations.