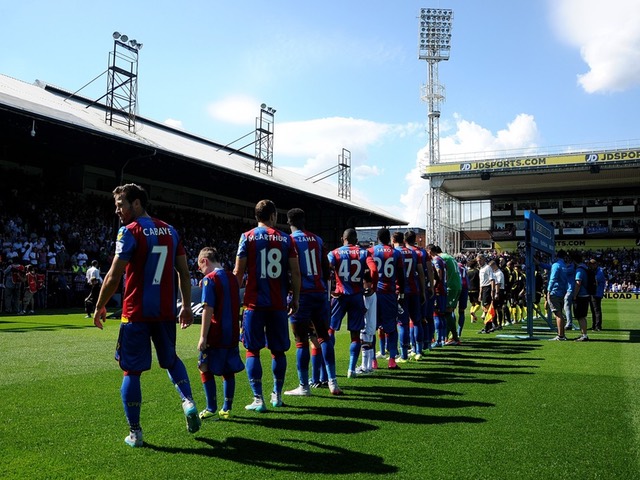 The glib (but honest) answer to the question of who will be Palace’s key player on Saturday is “all of them!”  Although it does not take a tactical genius to work that one out, the fact is that the whole team was pretty much “on it” against Chelsea two weeks ago and a repeat performance is going to be needed (and perhaps more) to get something out of the match against Man City.

Given the way City have been destroying the opposition so far this season-10 goals scored and none conceded-the key for me will be keeping it tight at the back. In particular Dann and Delaney are going to have to be at their very best to keep the likes of Aguero, Silva, Toure and even Kompany from scoring. And that is even before we get on to mega million signings, Sterling and De Bruyne.

In the same fixture last season we were able to keep City (mostly) at bay. Yes, they were moving the ball around at dizzying speed, and yes at times the ball seemed to be glued to their feet, but with the exception of one moment of Toure magic, City never managed to find the final pass or shot to unlock the trap door that Messrs Dann and Delaney had firmly shut. So far this season the boys in sky blue seem to have every key available to pick any lock that the likes of Chelsea, and West Brom have used- and these are teams which are no slouch at defending.

Notwithstanding the zero goals conceded statistic, I am hoping we will have the skills and the ability to put paid to that record- my fear is that if we try to out score City we will give ourselves a mountain the size of Mount Everest to climb.

I still vividly remember Yaya Toure running through Damien Delaney as if he was not there to score when we played City in the 2013-14 season.  The way Damien had Diego Costa in his pocket two weeks ago gives me some hope that there will be no repeat of that episode this Saturday- but as we know Toure is not the only threat.  Dann has been his usual cool, calm, collected self so far this season and we will need him to show all of those qualities with the attacking options City will have at their disposal.

Of course it is not fair to put the burden on just our central defenders- all of the back five and the midfield are all going to have to make their contributions to keeping City from scoring (or at least only scoring once). If we are able to stop the goals flying in, we might just be able to get something from the match. Who knows, Scott and Damien have already scored this season so maybe one of them will play a key role at both ends of the pitch!