The end of a crazy week for Palace is a trip to St James' Park against a Newcastle side who haven't scored a goal yet this season. The Eagles are on zero points and will be looking to get off the mark in Neil Warnock's first game as manager back at the club. 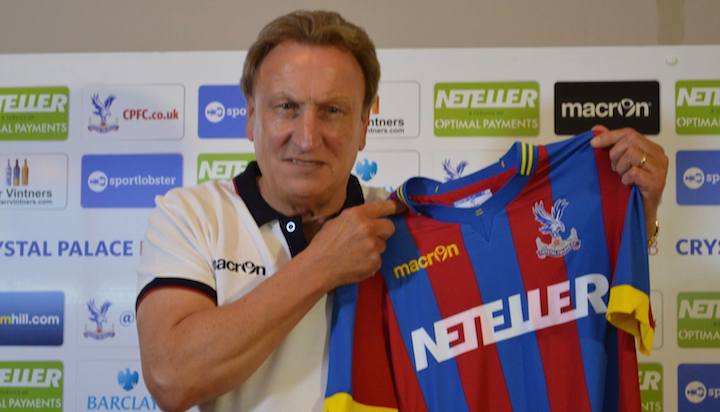 Joe Ledley and Scott Dann missed the home defeat to West Ham ; the midfielder pulled up in the warmup with a groin injury and will sit out the trip to St James’.

Dann was injured in the opening day defeat at Arsenal but could be involved at Newcastle.

Adrian Mariappa might get a chance to take part after returning from a rib injury against Walsall in midweek while Jason Puncheon is available after suspension.

Adlene Guedioura impressed in the cup win at Walsall and could get the nod in midfield next to Jedinak.

Wilf Zaha is back on loan but might have to settle for a place on the bench to begin with.

For Newcastle Rolando Aarons and Jack Colback are available after shrugging off knocks, but neither Cheick Tiote nor Mapou Yanga-Mbiwa are available.

The last time Neil Warnock took a team to play Newcastle at St James Park, Palace had just been placed in administration and he was forced to not play Victor Moses in order to avoid risking any potential sale of the winger.

This weekend, his second spell as Palace boss starts with a trip to the same ground. It's been quite the four years between the two mentioned fixtures but sentimentality aside, Palace need to stop the rot against a Newcastle side also looking for their first league win of the season.

Newcastle have started this season with a home defeat to last season's champions, Manchester City and a scoreless draw at Villa Park last weekend. The Geordie faithful will be expecting a win this weekend and with a host of new faces in the squad, expectations are high for a good season ahead.

Siem de Jong, former captain of Ajax, could prove to be a very astute signing. Since selling Yohann Cabaye last January, Newcastle's midfield lacked drive. Alan Pardew will hope that de Jong will be able replicate the form of the departed Frenchman and also chip in with his fair share of goals.

Another addition to the midfield was Remy Cabella. After what seemed a never ending pursuit of the Montpellier playmaker, Mike Ashley was finally persuaded to match the asking price and bring Cabella to the North East. However, his arrival has in all likeliness ended fan favourite, Hatem Ben Arfa's time in black and white. Don't be surprised if he leaves before midnight on Monday.

It takes balls to jump from one rival to another but that's exactly what Jack Colback did during the summer. As his contract ran out at Sunderland, the 'Ginger Pirlo' decided to head along the road and become a Magpie and his form at the end of last season and beginning of this has seen him earn an England call up. Whether he is international class remains to be seen but he was probably one of the best free transfers available in the summer and Newcastle did well to bat off interest from an array of other top flight clubs.

Alan Pardew, he of the eternal contract, must again find the balance between winning games but not winning enough games that would qualify Newcastle into Europe. Such was their annoyance at having to play Thursday nights the season before last, it was as if it was insult for them to play the extra games.

One thing is for certain this Saturday;   Kevin Friend, the fourth official, will have his work cut out with both Pardew and Warnock to look after.

Newcastle United are unbeaten in the last eight games between the two sides, winning seven and drawing one.

The Eagles have scored on average 0.47 goals per game against Newcastle United at St James' Park compared to the Magpies' 1.41 goals.

The Magpies have won their last four games against Crystal Palace without conceding a goal.

Neither side have scored more than three goals in this fixture in all competitions.

Crystal Palace have only picked up two points from their last five games; in the five game run before that the Eagles picked up a full 15 points.

Four of Newcastle's last five Premier League games at St James' Park have ended in defeat for the magpies.

The Eagles have conceded two or more goals in each of their last five Premier League matches.

Tricky first game for Warnock but the squad will be boosted by Wilf's return and Yala's new deal. Newcastle are far from in form so exp[ect Palace to go there and be combatitive. A goalless draw seems on the cards.