Palace are still searching for a win this season and welcome the newly promoted Clarets to Selhurst, where they enjoyed an entertaining 3-4 win the last time Burnley were in South London. 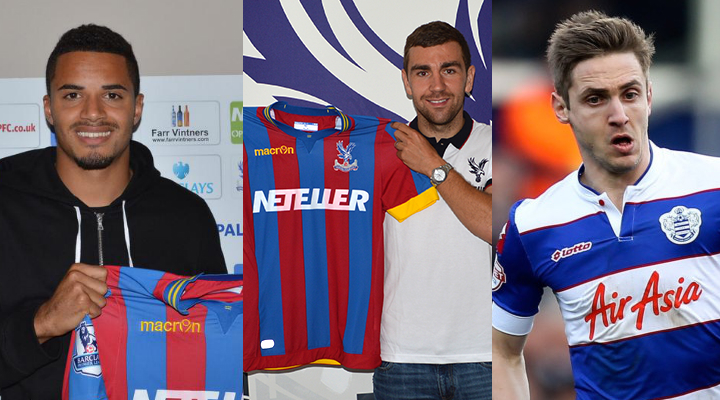 Deadline day signings Zeki Fryers and James McArthur could both be in line to make their debuts for the club, Fryers at left-back, McArthur in centre-mid.

Joe Ledley is still recovering from a groin injury but did manage 30 minutes for Wales in midweek.

Marouane Chamakh, meanwhile, is definitely out injured but Dwight Gayle could be back in contention after going off injured at Newcastle too. It means 89-year-old striker Andy Johnson could get a place on the bench after coming back to the club.

Wilf Zaha impressed off the bench in his first game back at Palace so could be handed a start, but Peter Ramage, Stuart O'Keefe, Jimmy Kebe and Lewis Price cannot feature for the first-team until January after being left out of Warnock's 25-man Premier League squad.

For Burnley, star forward Danny Ings is expected to shake off a slight knock to feature, but fellow striker Sam Vokes is a long term injury lay-off.

Another forward, Michael Kightly, could get a game after returning from injury to score for the U21 side this week.

Deadline day signing George Boyd could get the nod ahead of Matt Taylor.

England have effectively qualified (not that losing on Monday night would have mattered) and Sky have reached new highs (or lows depending on viewpoint) by deciding to make Andorra v Wales a big deal.

Enough of all that nonsense, Palace are back as we welcome Lancashire folk to Selhurst in the form of newly promoted Burnley.

While Palace fans might think that being relegation favourites at the start of a new campaign, only to surprise all and gain promotion to the Premier League is norm, having been THAT side the season before last; Sean Dyche's achievements of last season should not be underestimated. Having inherited a fairly average looking squad after Eddie Howe left to return to Bournemouth, Dyche went about his business by insisting upon strict tactical discipline while getting his side to play some nice stuff and ended last season one of the most heralded manager across the football league.

The loss of Charlie Austin to QPR before their promotion campaign was also a cause of worry for fans of The Clarets but the emergence of Danny Ings and his fruitful partnership with Sam Vokes made Austin a quick and distant memory.

Their goals were a main reason for their promotion but with Vokes still nursing a serious knee injury, Ings will be expected to score his fair share of goals if Burnley are going to have a hope of staying up.

New signings weren't of the obvious quality required to keep them up but the likes of Matt Taylor and Steven Reid will add top flight experience that was otherwise lacking from the Burnley squad.

Like Palace, Burnley have managed to pick up just the solitary point in their opening three games, although it should be noted they have played Chelsea, early pace setters, Swansea and Manchester United, who aren't perhaps the force they were but still a stiff test for any newly promoted side.

Palace's season last term and the way in which sides like Swansea have adapted to the Premier League in recent years give any promoted side encouragement but Burnley need to start turning half decent performance into wins and adding to their points total.

Readers of this will obviously hope that they don't start that habit on Saturday.

Burnley have scored 12 goals on their travels against Crystal Palace; they have also conceded the same amount.

In the last fixture at Selhurst Park, the highest amount of goals were scored in this fixture with Crystal Palace winning 4-3.

The Eagles have failed to pick up a win in the Premier League so far this season; losing against Arsenal away from home, losing their only home game and drawing last time out to Newcastle.

The Clarets' only point of the season was picked up against Man Utd; beforehand they lost to Swansea and Chelsea.

Crystal Palace have only lost one of their last five games against teams beginning with the letter B.

Burnley have won the previous four top-flight matches between the two sides.

The Eagles have lost five points from a winning position this season; more than any other side.

The Clarets have won only one of their last 20 Premier League matches away from home, drawing just the once and losing on 18 occasions.

Dwight Gayle is the form player in this fixture; scoring four goals in his last two games.

The Lancashire side have featured at least nine English players in all of their games in the Premier League this season.

In Wilfried Zaha's last three games against Burnley, he has scored twice and has received a red card.

A must-win game already if we're going with cliches. A late equaliser at Newcastle two weeks ago will have boosted confidence and a similarly battling performance should do the biz against the Clarets.