Palace take on a fellow relegation struggler looking for all three points. 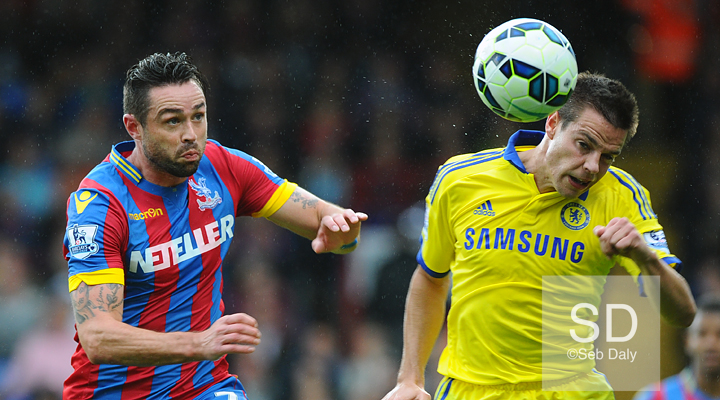 It's all about the defence for both teams who have both been struggling with injury of late.

For Palace, Scott Dann made his return after a few weeks out against Sunderland on Monday and Damien Delaney (above) was also back from suspension but sat out due to illness. He is set to play at Old Trafford.

Palace will, though, be without captain Mile Jedinak for the trip to Manchester. He was sent off for two yellow cards against Sunderland. James McArthur is expected to replace him.

Wilf Zaha isn't allowed to play - being on loan from United to Palace - to Jason Puncheon will almost certainly come in.

For United Chris Smalling is missing after getting sent off in the Manchester derby last weekend.

Marcos Rojo, United's other starting centre-back in the derby, was also forced to leave the field with a suspected dislocated shoulder, meaning Van Gaal is set to be forced into a reshuffle at the back this weekend.

Injuries have been an almost constant problem for the Dutchman early in his United tenure, with Michael Carrick - fit again following a lengthy lay-off of his own - one potential option to come into defence.

Ashley Young (groin), Phil Jones (calf), Radamel Falcao (calf) and Jesse Lingard (knee) are all set to remain unavailable for the hosts, while Jonny Evans (ankle) is also expected to miss out.

It's not as scary a prospect as it has been at times during the past 25 years but it's still one of the fixtures that fans look to see in June when the fixtures are released.

In the last 18 months, the fear of playing against United has certainly reduced but many football fans (both United and neutral) believe it's only a matter of time until they start to challenge for anything and everything going as they did during Sir Alex Ferguson’s reign.

Such belief seems premature to me.

Following his retirement, not only have performances on the pitch suffered but the club also seem to have lost their way in regard to how they go about their business. Losing Ferguson and former Chief Executive, David Gill at the same time was never going to be easy for the club but since their departures… to the Directors Box at least, United have at times embarrassed themselves.

Instances such as their pitiful joint bid for Leighton Baines and Marouane Fellaini, their massive overspend on the latter, the mismanaged sacking of David Moyes and their NBA All Stars approach to signings in the summer just gone have made the club look a little more human and vulnerable to being ripped off than they did when Ferguson and Gill were steering the ship.

The team that was named against arch rivals, Manchester City last weekend was claimed to be the most expensively assembled side in Premier League history and yet fans of the club appeared to be fairly content with a battling 1-0 loss. Granted that Chris Smalling's two moments of madness probably altered the match's direction but for a side containing so many big names and transfer fees, they hardly created a chance. In recent weeks, the much derided Fellaini has been put back into the team and in fairness has looked one of their better players but can United fans honestly accept lumping the ball long to the afro'd Belgian is at times their most effective attacking tactic when the squad contains the like of van Persie, Di Maria, Falcao and club captain, Rooney?

Following their defeat to City on Sunday, the fact that this is United worst start to a season in 25 years was plastered all over social media but for whatever reasons, fans seem to be more accepting of Louis Van Gaal's slow start than they were of David Moyes'. Whether the Dutchman's CV allows him more time to settle or United fans just weren't keen on Moyes doesn't really matter. The financial resources offered to Van Gaal suggests the board trust their appointment and regardless of a slow start, he will continue to have the board's backing.

Despite the massive outlay made on transfers this summer, United have also had to rely on youngsters stepping up to the first team, especially defensively. This weekend could see a back line with three teenagers (Paddy McNair, Tyler Blackett and Luke Shaw) and Antonio Valencia playing out of position at right back. Most likely though will be either Michael Carrick or Daley Blind dropping into the centre half position but even if a more experienced player does drop in, Old Trafford probably won't have seen a more unfamiliar back line since Gordon Ramsey, Michael Sheen flanked Jaap Stam and Hernan Crespo in a Soccer Aid match a few years ago.

Chris Foy is the man with the whistle on Saturday. By no means have (dodgy) refereeing decisions been solely to blame for Palace’s stuttering form of recent weeks but when you aren't getting the rub of the green with decisions, heading to Old Trafford hardly lifts the referee related gloom, does it?

I hope Mr Foy and his officials enjoy loud swearing in a thick Yorkshire accent. They're probably going to hear quite a bit of it on Saturdayafternoon.

Away matches at grounds such as Old Trafford shouldn't be the difference between Palace staying up and going down but having picked up only one point from two matches that seemed very winnable, if anything can be claimed from this fixture, then it would certainly be very welcome.

Knowing Me Knowing You

Josh Esaw remembers players who have played for both Palace and Man United.

Crystal Palace have won two, drawn two and lost 13 games against Manchester United in the league at Old Trafford.

Manchester United have scored 29 goals against Crystal Palace in the league whilst conceding 23.

The Eagles last won a league game at Old Trafford against the Red Devils in the old English Division One where Crystal Palace were 2-1 winners in the 1989/1990 season.

The Red Devils completed the double over Crystal Palace in the Premier League last season, winning both games by two goals to nil.

Crystal Palace have never won a game against Manchester United in the Premier League, losing eight games and drawing two.

Since an opening day defeat to Swansea City, the Red Devils have picked up full points in all but one of their games at Old Trafford; giving them a total of ten points at home from five games.

Manchester United have conceded six goals from set pieces so far this season; only visitors Crystal Palace and Tottenham have conceded more with seven.

Games that Crystal Palace have played in away from home have featured an average of four goals per game; the Premier League's highest average.

The hosts have kept only two clean sheets in their least 12 Premier League games at Old Trafford.

Not an easy one at all but with injuries ravaging the United team maybe it's the best time to play them. Expect goals at either end - Palace have only failed to score in two league games this season. We're going for a credible 2-2 draw.