After 10 years with Palace, first team coach Ben Garner has left the club. FYP's Matt Woosnam previously sat down with him for the most recent issue of the fanzine, as he talked about his desire to become a manager one day. 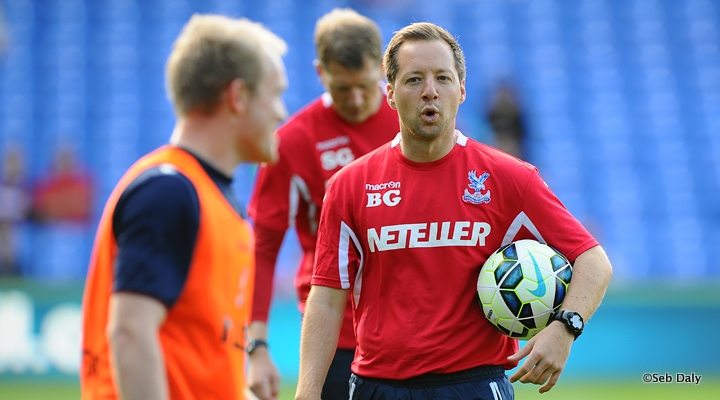 How does it feel to be a young coach in a profession where arguably experience is important? Is there a case for experience and passion?

I think you have to have experience in any line of work to be successful - I know I'm relatively young at 34 but I've been coaching for 13 to 14 years so am experienced in my job.  At CP I coached in the Academy for 7 seasons and this is now my 3rd season with the first team.  In terms of the Academy I worked with a number of teams and coached a host of talented young players including Wilfried, Nathaniel, Sean, Victor, Jonny and many others.

With the first team I achieved promotion via the play-off final at Wembley, finished 11th in the PL, and now am working hard to make sure that we stay there again.  Alongside this I have always been very dedicated and have made sacrifices in terms of prioritising my career.  I have always known where I want to get to so have been extremely focused.  Although I didn’t have a significant playing career I always had that love for the game and as I was an intelligent player my game understanding was always there which is important.  My life has been dedicated to studying the game and gaining as much knowledge as I can.

What did you do before you came to Palace?

After fracturing and dislocating my ankle I went to university and studied sport and exercise science.  I instantly knew that I wanted to coach and already had my Level 2 qualification so I went on to obtain the UEFA B qualification and started to build my coaching hours.  I coached two junior sides at Chipstead FC, worked in development centres and schools for Fulham FC, coached in America for 6 months for MLS, and ran my own soccer school.

A friend talked me out of playing retirement so I played for a couple of years down at Sutton United and did some coaching there as well but when I began to get the onset of arthritis in the ankle joint I retired for good at 25.  I had been given a job as head of boys’ p.e. at St. David’s College and combined this with the Under 11 Academy team at CP when I was offered that job.

You were the head coach at the Oasis School Partnership, when the under-15s were named national champions and a lot of those are Palace related -- because it's obviously the partnership between the club and Oasis - quite a few of those are still at the club. Was that a proud moment for you?

I had a blank canvas when that scheme was set up and I was able to design the scheme how I wanted, how we coached and what we did on certain days - it was fantastic to do that and to really do what I thought was right with those young players.  The extra contact time with them was invaluable. They did fantastically well, played some great football that year and won the national school title. It was a good scheme, it's still going now, and we've got a lot of players now full-time at the club through that scheme - it has gone well and hopefully will for many years to come.

How important is it for these kids to have a school where they can be challenged academically and in football? Is that important?

You have to have extra contact time now - when you look at European counterparts and they contact time they had with their players, we were behind and had to catch up in that respect. But it's not about how much time you have, it's about what you do with that time. The coaching has to be spot-on - you have to make sure that you're really maximising the target and cementing the educational side of things - that's just as important. The drop-out rate in professional football is so high that it's important that these boys get an education alongside that.

Do you see yourself as a manager someday?

Yes I do.  From when I first started coaching my ambition has always been to manage. I'm really happy in the role I'm in at the moment - I love the club and the manager is fantastic to work for.  Im learning and progressing all the time but in the future, if the right opportunity presented itself, then I'd love to take it. But with my lack of playing background, it becomes more difficult to get jobs - so I've always taken the stance that I've always got to prepare myself for that opportunity so, so well because I've got to take it when it comes around and I need to be instantly successful

You're no longer involved in the youth team - is it a good thing that you're a link between them and the first team?

The bottom line is that it's always down to the players. Me being with the first team isn't going to help - they don't have a god-given right to be in the first team at this club or any club - they're going to have to work extremely hard to get into the first team at a Premier League club - it's more difficult than it is at a Championship club. They'll have to raise their standards and improve further still. Perhaps go out and gain experience in the Football League to get themselves closer.

How easy is it for young players to transition into the first team?

With first team players it’s about an outcome, it’s about the result. It’s more team based, the group is important more than individual, about achieving a result, winning football matches and how you coach and prepare that is very different. I’ve always had an ambition to do that. It’s about developing players, especially U14, U15 it’s about developing payers within a team setting and the understanding of their game, their technique and physically as well it’s about coaching an individual. You’re trying to get a lot more info across to young payers.

At senior level players have a fantastic understanding of the game and its embedded in tactics and the style of play to achieve a result. Everyone is unique in terms of their personality and with anything in life you’ve got to be committed to a certain part of it has to be natural. You have to be good at something then it’s your dedication your passion and learning that pushes you on. Coaching came naturally to me. I enjoyed it straight away, felt that I had a natural ability for it, and built an instant rapport with the players.

He is very clear on what he wants and I think that is the sign of a great manager, there’s no grey areas, in and out of possession off and on the pitch, he knows what he wants from the team from the club and if you’re ever gonna take a club forward it’s important to know where you’re doing. He strikes me as knowing that and where he’s gonna take it.