In response to our letter to Norwich City FC regarding their ticket prices, FYP received a reply from their CEO, David McNally. The letter, dated 07/07/2015 was subsequently delayed in transit and only received this week. We have decided to publish it in full, with our thanks to David for taking the time to respond. 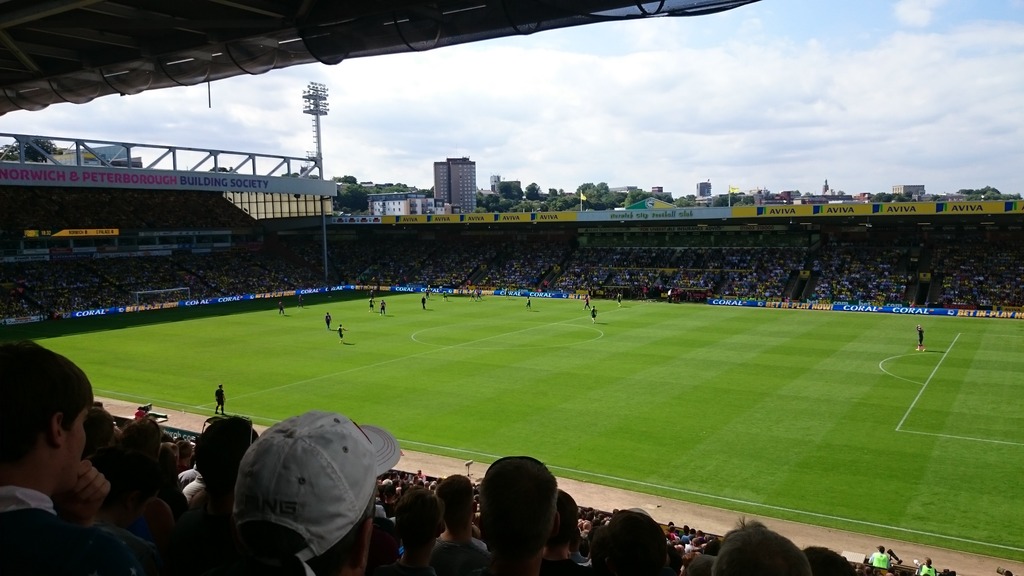 To all at Five Year Plan Fanzine,

Many thanks for your e-mail and open letter which I received this weekend and for the considered view and arguments you took the time to put forward. Apologies by the way for the somewhat impersonal address above, but no individual names were listed in the letter I received. Let me say we do of course have real sympathy with those who may find the cost of supporting their team to be a challenge at times and we are always extremely grateful for the fantastic loyalty and backing shown to this club by Norwich City supporters here in Norfolk and further afield.

We remain in turn totally committed to supporting our first team and serving our supporters, not least by always endeavouring to provide them the best possible value for the money they give their football club.

l'd like to mention some key points which we believe are worth bearing in mind when considering our ticket pricing policy. There is a unique financial backdrop which affects our ticketing strategy at Carrow Road, which we think it is only fair to consider when evaluating our pricing for any given match.

In Delia Smith and Michael Wynn Jones we believe we have the best owners in football, but not by any means the wealthiest. Unlike the majority of clubs in the Premier League, we do not have any ad-hoc sums of cash coming into our bottom line over and above the television incomes you refer to - except for any income we can responsibly generate ourselves as a business.

Thanks to this and, of course, to the Financial Fair Play rules, we cannot spend on the team sums which outweigh what we can generate ourselves. In order to compete with our counterparts in the Premier League and to give us the best chance of continuing to provide Premier League football to the people around the county of Norfolk, therefore, we work to a strong co-operative model. The commitment we make to our fans is that every spare penny we generate goes back into football to support our manager Alex Neil's work on and off the pitch.

We have once again capped our season ticket sales at 22,000 for games at Carrow Road next year. This means that more than 80 per cent of the crowd present at our games are season ticket holders, who will this year be enjoying Premier League football at a massive discount - with adults paying £26.28 per match in most standard areas and Under-12s in family areas just £3.67 per game.
Despite the fact that season ticket income is clearly a key revenue stream for us, we froze our prices this campaign for a second consecutive season as a thank you to our fans for their loyal support in recent years. Carrow Road will have one of the highest proportions of season ticket holders as a percentage of overall capacity (in our case c27,000) compared to other grounds in the Premier League next season - and therefore one of the highest proportions of fans watching at a significantly discounted rate.

Committed to supporting our travelling fans

Like your own club Crystal Palace and the other clubs in the Premier League, we will be committing resources this year to assist our fans who follow us up and down the country in huge numbers via a range of initiatives. ln the past these have included substantial ticket and coach travel subsidies and we will be announcing this season's initiatives in due course.

Unlike some of the comparable facilities found at other grounds, the away section at Carrow Road offers unrestricted views from every seat - and a choice of positions ranging from pitchside to a more elevated vantage point. None of the seats are in an upper tier hundreds of yards from the pltch as is the case at some clubs. The catering and toilet facilities are also of an excellent standard.

Our price grading system has not changed in many years now and is designed to enable us to flex the price depending on the opposition and other factors, such as the date of the game, whether it's our first match back in the Premier League following an exciting promotion campaign and so on. lt's worth remembering that under league rules the prices we charge away supporters are also the casual prices we charge our fans in comparable home areas.

Our strategy is always to set casual prices which help us to achieve our overall objective, which is to sell out Carrow Road. Our record in this regard in recent seasons, in both the Football League and the Premier League, has been very good and this is something we are very keen to maintain.

Our opening Premier League game against your club, Crystal Palace, on August B is, I'm pleased to report, already another complete home sell-out. Crystal Palace have taken their full allocation in the away end.

I hope the points raised above help to explain our pricing strategy not just for the Crystal Palace match in August, but generally. Sometimes it can be easy to single out a particular game and criticise the pricing policy without taking into account other extenuating factors. For example, we have been criticised by fans of one or two clubs for our prices at Carrow Road, only for our fans to be charged similar prices when they visit the clubs in question - and in the Premier League there may well be some clubs who charge our fans more to visit their grounds than is the case for the return fixture at Carrow Road.

Thank you once again for taking the time to share your views so eloquently and your passionate support for your club is clear for all to see. I very much hope you will be coming to support them at Carrow Road on August 8, when l'm sure a full Carrow Road will generate a fantastic atmosphere which will be a credit to both clubs and to the Barclays Premier League.