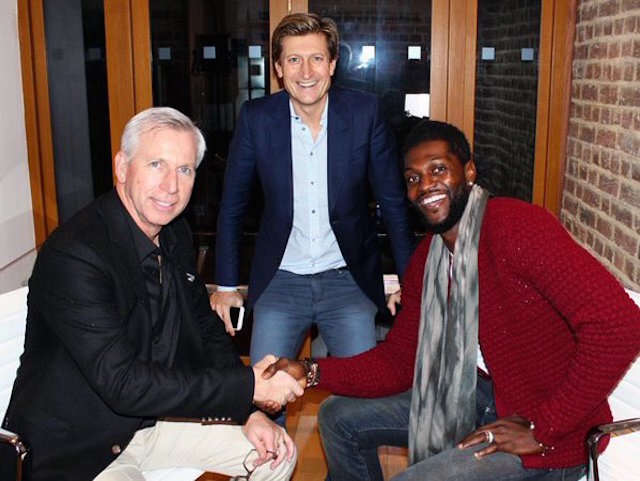 So Emmanuel Adebayor has signed for Crystal Palace.

The Togo striker has penned a deal until the end of the season to try and solve Palace's lack of goals.

But is he the biggest name ever to have signed for the Eagles? We rank the Top 10 biggest ever arrivals at Selhurst Park.

Probably one of Palace's weirdest ever signings when the Dutchman arrived at Selhurst in October 2010.

By then, though, he was 37 and vas very much in the twilight of his career. As expemplified by a horror debut at Scunthorpe where he played left-back.

But still, the arrival of the former AC Milan and Juventus star caused many ripples across South London just over five years ago.

Palace’s most expensive signing came to South London for £2.7m from RC Strasbourg in 1998.  The French central defender only played 13 times in his ten months with the club before moving on.

It would seem absolutely daft to most of us now if we spent that much money on a player, only to have him leave after such a short period of time – making our following plunge in to a period of administration come as no surprise after reckless spending like that.

Although it may be quite a while before we see spending of that calibre again, rest assured that at least we will have a club to follow in to the future.

Razor signed in 2000 and made 20 appearances scoring two goals before leaving on a free to Swindon.

A player with a somewhat dubious reputation on and off the pitch he was reportedly slated by Simon Jordan for taking the team out and getting them pissed during our relegation battle of that season.

Another big signing not because of money, not because it was a coup, or even because he was any good, no that’s right, I’m making another fat joke (I really hope he doesn’t see this, I’m rather partial to my testicles).

Former England international Ray Wilkins joined Palace towards the tail-end of his successful career as a player, coming to Selhurst in 1994 as player-coach.

However, his time at the club didn’t necessarily go as everyone would have hoped when the famous Palace luck obviously rubbed off on him and he managed to break his foot in his debut game!

That was pretty much that and he never played for us again.

Akinbiyi? A big signing? Are you bloody serious? Well, not literally. He’s been included here, in this list of big Palace signings, because he is quite possibly the biggest cock-up a Palace manager has made on the transfer market in recent years.

He cost £2.2m from Leicester in 2002. Upon the release of a picture of him stood there, next to Trevor Francis, holding his new number 55 shirt, there was a collective sigh from the Palace faithful of: “Oh for fff...” Apparently it was audible for miles outside of Croydon.

Quite prolific in his earlier career his move to Leicester saw a sharp decrease in his goals-to-games ratio and by the time he came to us he only scored three in 24. Not the best return for the amount of money we spent then.

To top this all off he later left to Stoke on a free after a short loan spell, and as if that wasn’t galling enough he started to come good from then on - scoring roughly one in three in his time with Stoke and Burnley!

The first ever million pound ‘keeper when he moved to Palace from Bristol Rovers in 1989 – it was reported (and confirmed by Ian Holloway in a BBC interview) that the much loved former Eagle was discovered by none other than the Rovers’ tea lady! Honestly. She saw him play for a local side on holiday in Cornwall and after a week in the Pirate’s reserves he was in the first team.

So I’m sure all of you, my fellow Eagles fans, will raise your glasses and join me in thanking the catering staff down in Bristol!

Nigel made quite an impression during his tenure at Selhurst, who can forget that moustache? One can only assume that it disappeared after he saw David Seaman one day and thought: “Bugger that!”

Dodgy facial hair aside, he was loved in SE25 – evident after his inclusion in the ‘Centenary XI’ – and  after 7 years and nearly 300 games he left to Leeds United in 1996 for another record transfer fee.

Quite literally, a big signing. Signed by Coppell in 1997 and only played 13 games in red and blue having his only goal disallowed in his debut game.

Before several loan deals to foreign clubs and his eventual move to London he played for Leeds United where he earned the nickname “Tubby” and was labelled a “big, fat disappointment” – a bit harsh when you consider he made the list of the all time 100 greatest Leeds players, even if he did come in at number 100.

The Nordic giant struggled constantly with his fitness and went on to become Lombardo’s assistant shortly before his retirement from the game at the end of 1998.

On a free transfer yes, and hasn't played Premier League football for nine months sure, but still a huge name to be arriving at Selhurst.

Especially as he is still only 31 and, crucially, has joined on a deal till the end of the season.

But not many other new arrivals at Palace can boast the sort of pedigree the Togo striker can; having played and scored goals for the likes of Arsenal, Manchester City, Tottenham and Real Madrid.

He's one of the most, if not the most, famous footballers in Africa and is still the sort of name fans around the world will recognise.

The former Juve player came to the club in 1997 and became an instant favourite, scoring on his debut game against Everton.

The Italian ace was recalled to his national squad during his time at Palace but due to a subsequent injury he was sidelined for most of the season, which eventually saw us relegated.

The Bald Eagle also had a short stint as player-manager (alongside Tomas Brolin, watch out for him later!) but due to some bloody idiot taking us in to administration the next season, something we are all too familiar with now-a-days, he moved on to Lazio where he gained a plethora of runners-up medals under the “world-renown” Sven-Goran Eriksson.

Probably Palace's highest ever profile signing, when he arrived from Paris St Germain in the summer of 2015.

A world class midfielder still at his prime at 29 and eyeing a place in France's Euros squad for 2016.

Probably the only player ever to join Palace who could have walked into any other Premier League starting XI.