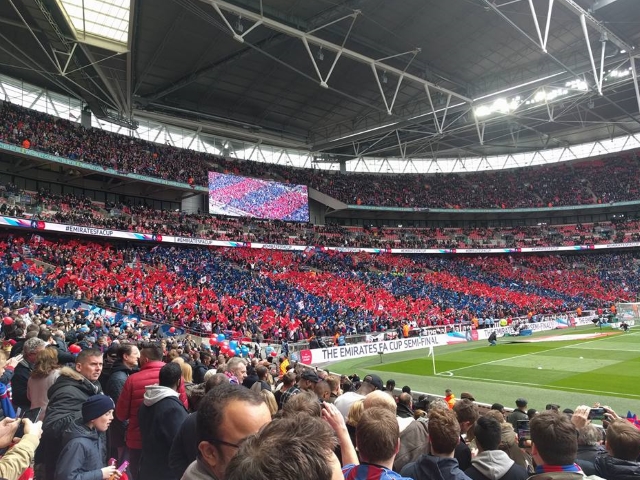 Maybe it was 1975 and Crofty at school. Maybe it was Big Mal's Fedora, Peter Taylor's winner at the Bridge or Fiona Richmond in the bath? Maybe it was my dad waving my scarf in home end as we won 3-0  at Millwall.
Maybe it was Mr Heffernan giving me a lift on a Saturday; maybe it was the roofless Holmesdale end with Barry cheering on Billy, Jim and Doris.
It was definitely Kenny; It was Friday May 11th 1979 v Burnley; it was singing on the pitch till I was hoarse.
It was the team of the eighties. It was El Tel. It was Jim Cannon's volley. It was Vince Hilaire.
It was Wright and Mark Bright. It was John Salako, It was Andy Gray, It was Geoff Thomas. It was Sir Steve Coppell. It was Villa Park; it was Wembley; it was 8 minutes from history.
It was Europe (almost). It was sales. It was disintegration. It was half empty grounds; it was dire.
It was up; it was down. It was bloody Steve Claridge, it was Hopkin looking to curl one. It was Attillio Lombardo (Yes it really was Attillio Lombardo). It was administration; it was being a yo-yo. It was administration. It was almost all over. It was Dougie at Stockport in the last second.
It was Andy Johnson. It was bouncebackability. It was the Millennium Stadium. It was in the big time. It was Aki it was Hughesy. It was goal difference at Charlton. It was telling your boy it didn't matter; it was believing that money doesn't always buy you love or happiness.
It was administration again. It was Butterfield day. It was the edge of the precipice. It was Sheffield Wednesday away. It was do or die. It was Shaun Derry (he's better than John Terry and Stevie G) It was Alan Lee. It was Ambrose.
It was D day. It was the moment of truth. It was the fans. It was the protests. It was genuine tears of joy. It was salvation. It was new beginnings. It was a five year plan.
It was walking in a Dougie Wonderland. It was that goal at Old Trafford. It was FFS Murray. It was Ollie. It was Wilf at the Amex. It was Wembley. It was Super Kev. It was Dammo and Rambo. It was the promised land.
It was McJedley. It was the team and fans as one. It was John Terry scoring goals for Palace. It was Crystanbul. It was amazing.
It was the return of the prodigal son. It was Punch. It was Yala. It was Jules. It was Jedi. It was emotional.
But most of all, it was us. It was the fans; it was the noise. It is the passion. It is the hope. It is joy. It is the pain.
It’s bonds that last a lifetime. It’s father to son; it’s father and son.
It’s walking down Wembley Way, it’s remembering the journey and all who shared it. It hoping against hope that, finally, this will be the day. The day you will remember above all others. It’s the stuff of dreams.
Tweet
back to top
Tweet
Category: News