Sam Johnstone has been confirmed as Palace's second summer signing, arriving from West Brom on a four-year deal.

Sam Johnstone's arrival from West Brom on a four-year deal is the latest calculated signing for Crystal Palace at the goalkeeper position.

Aside from the various third-string 'keepers that have come and gone over time, Johnstone is the sixth that has joined to compete for the number one spot since promotion, the seventh being the incumbent Julian Speroni.

Transfer fees are not the only factor to account for, as signing fees will naturally be higher for "free" transfers, but the net spend is remarkably low when using the broad brush estimated fees.

Even the two "failures" Steve Mandanda and Alex McCarthy may not have worked out at Palace as planned, but were low risk and have continued to deliver in top-flight football.

Landing a player like Sam Johnstone at 29 is likely securing him for his prime years as a goalkeeper. His being on the edges of the England squad adds further credibility.

As a Manchester United academy graduate, he was sent out across the EFL on loan, including Aston Villa, before getting a permanent move to West Brom in 2018.

Very experienced at Championship level, Johnstone has a single season in the Premier League where, much like his then-teammate Conor Gallagher, he outperformed the club's league position.

Per Statsbomb, Johnstone ranked 9th for "prevented goals" (+4.4) in a season where he faced 228 shots on target, the most in the division.

The top-flight sample is too small to paint a definitive picture of Johnstone against the best competition, so turning to his Championship play, his traits will have interested Palace.

Despite being listed at 193cm in height, Johnstone can move quickly off his line and shows good reflexes, as highlighted in his double save against Blackpool last season.

He has carried a reputation of being error-prone on occasion. Still, the hope will be behind a defence that has developed a good understanding Johnstone will face far fewer shots on average, exposing him less.

In a Patrick Vieira-led team, there will be an emphasis on goalkeepers passing short and being a sweeper option to retain possession. 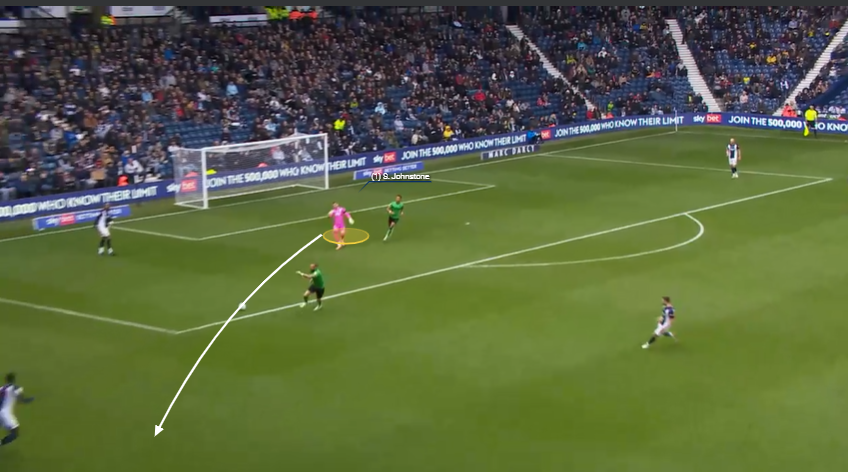 The expectation isn't for this player to have the range of passing as Ederson at Man City but rather to show the composure to redirect the ball to the two defensive playmakers, Joachim Andersen and Marc Guéhi, especially when being pressed by a forward.

In the Steve Bruce Wrest Brom system, there is a greater emphasis on safety-first than you would expect at Palace, but on occasion, Johnstone still shows the aptitude to pick out an open full-back rather than going long.

As a prospect, Johnstone has every chance to get a valuable signing for the club. The threshold he will need to meet is only that of a league-average standard. Any seasons above that level is more than a bonus.

Even if he has limited minutes or the competition drives a high standard from Guaita, the club will still have succeeded in the short term.

Dougie Freedman, as Sporting Director, had a hard deadline to decide on the goalkeeper spot as Vicente Guaita and Jack Butland are only contracted until the end of the 2022/23 season.

Guaita has proven to be an excellent 'keeper for Palace, and there is an argument for adding him as a 4th all-time great alongside John Jackson, Nigel Martyn and Julian Speroni.

Guaita had one genuinely exceptional 2019/20 season, visually and by the "prevented goals" metric, which ranked third in the Premier League. Those performances were critical in avoiding relegation in a team that only scored 31 goals and endured a lot of defensive pressure.

Now in 2022, Guaita is a high-variance player, still capable of the sublime but unlikely to display the high level of consistency he once did.

It seems logical that teams that either promoted sides or those at the top of the Championship will be interested in Jack Butland, making him the prime candidate to make way in this window.

Palace will hope that Johnstone earns the number one spot, given their investment. Whether or not Guaita will accept being the veteran backup spot long-term remains to be seen.