It may have felt like Crystal Palace had a "free-hit" at Anfield following the victory against Tottenham, but the defeat still tastes the same. Following the defeat at Anfield, here are our key takeaways. 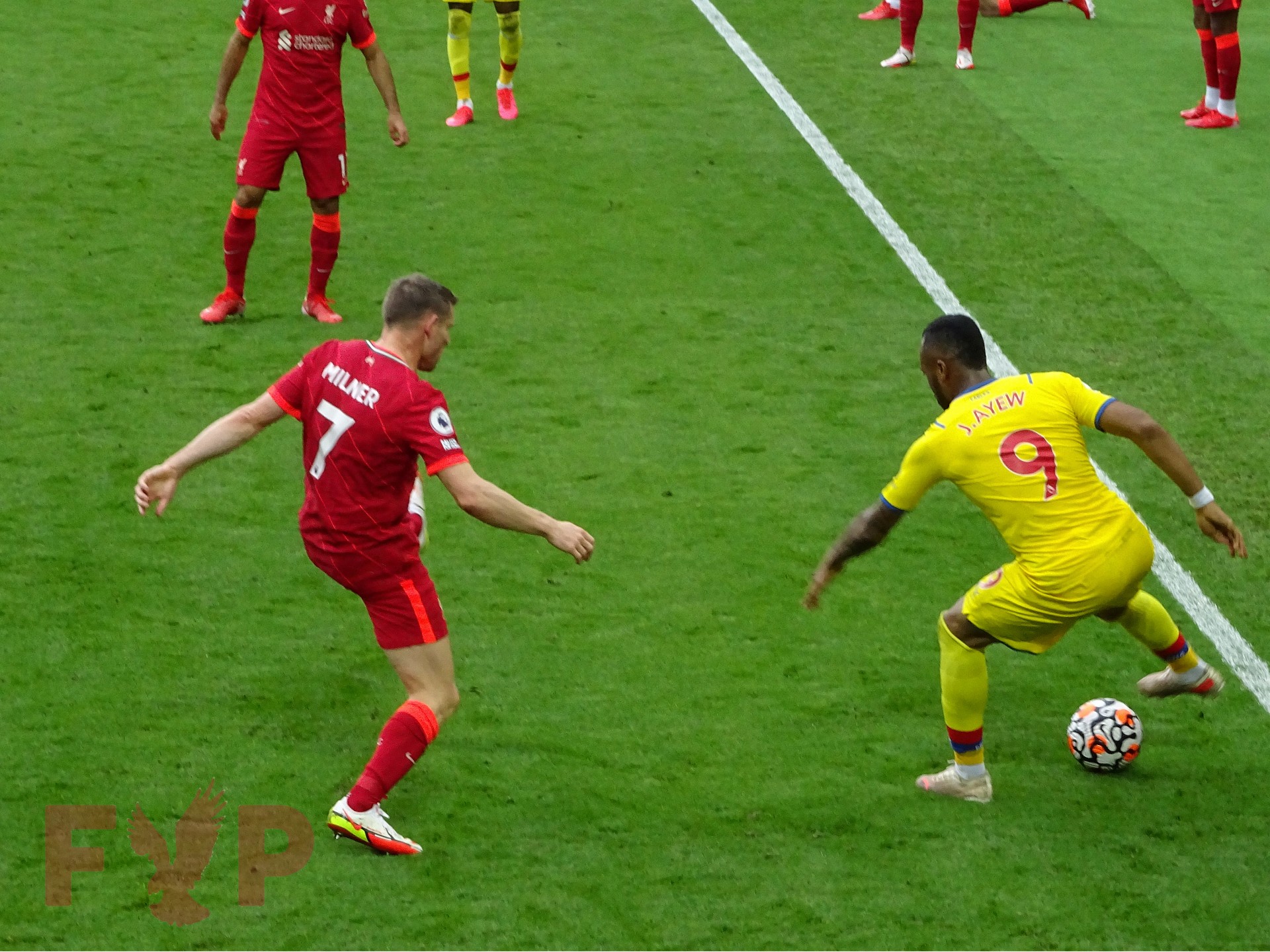 In this world, nothing is certain except death, taxes and Sadio Mané scoring against Crystal Palace. The Senegalese forward's opening goal took his tally to 13 goals in 14 league games against the visitors. His rebounded effort from a corner kick gave Liverpool the lead into the half-time break, but whilst his goal may seem like "Typical Palace", there were encouraging signs from the contest.

In the press conference leading into the fixture, Patrick Vieira spoke about Palace being brave and not sitting back against Jürgen Klopp's side, and the team followed suit.

The team came out of the blocks quickly, as a heavy touch from Wilfried Zaha was scrambled onto the post by Alisson in goal. Christian Benteke followed shortly, hitting the woodwork once more. To have a puncher's chance in a match like this, a manager needs at least throw one, something that Palace couldn't say in the 9-0 aggregate loss to Liverpool last season.

The energy and physicality in midfield throughout the game were highlighted by Jürgen Klopp, one he described as a "hard-fought" victory. Those efforts, replicated across the season, will stand the team in good stead.

Palace's passing wasn't to the standard set out in their victory over Tottenham but didn't regress to the opening fixture against Chelsea. To improve as a team in possession, facing one of the dominant pressing schemes in Europe is a valuable test for Vieira's players. The half-time adjustments saw an even of the ball in the second half, and until Salah doubled the Liverpool lead in the final 15 minutes, Palace was still much battling to get back into the game.

Both Palace defeats have been 3-0 losses to teams predicted to finish in the Champions League places this season. While the final scoreline is identical on paper, the feeling at the final whistle was quite different. 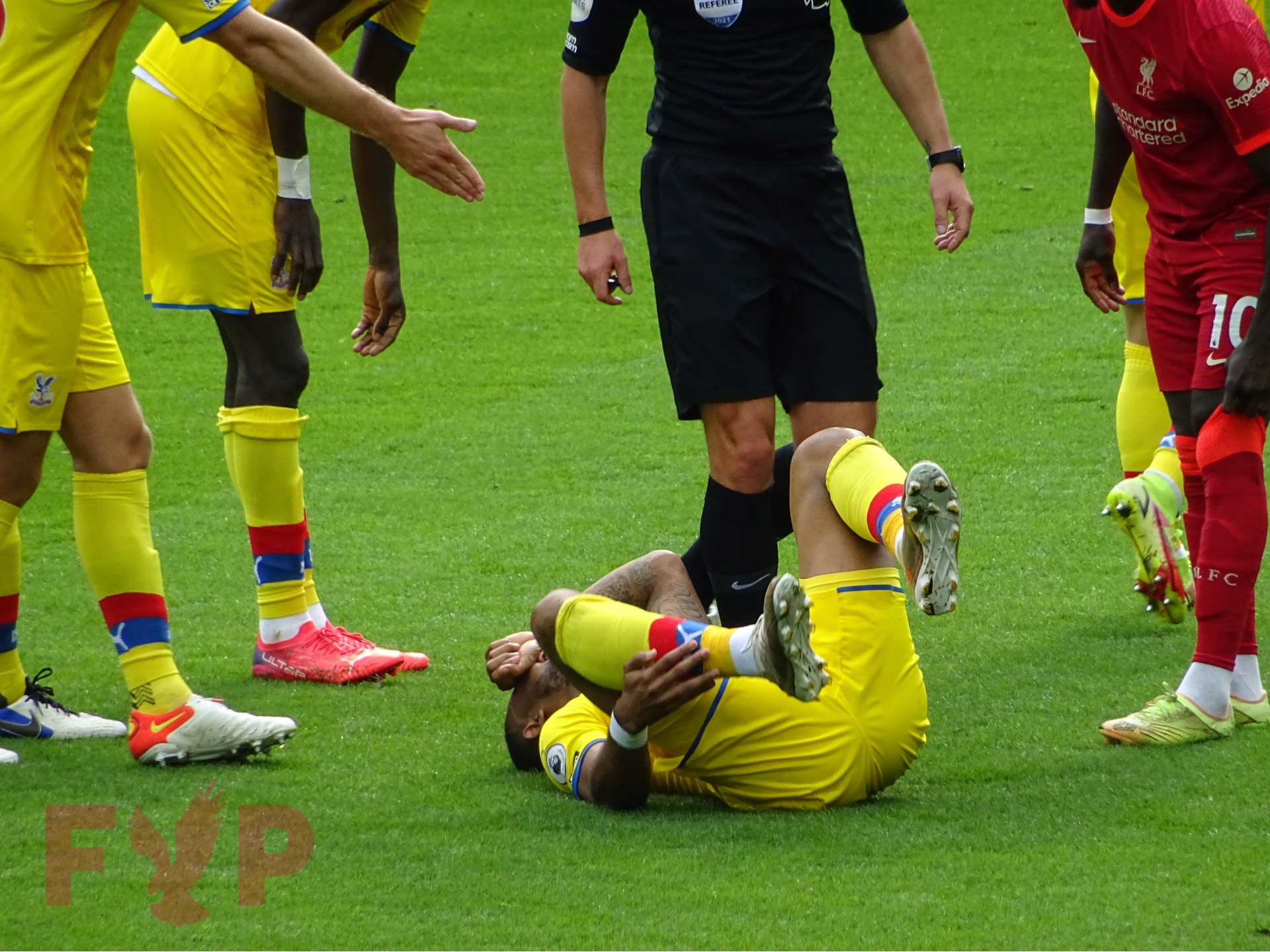 The ghost of pre-season came back to haunt Crystal Palace against Liverpool. The perceived weakness in the friendlies, albeit when some reserve players were featuring, had been defending corners.

Given the amount of tactical installation Patrick Vieira and his freshly appointed coaches were trying to achieve in limited time, reduced focus on defensive corners would be more than forgivable. Subsequently, Palace has dealt well with the 17 corners in the opening four league fixtures, featuring Vicente Guaita punching the ball clear when possible.

This resilience came crumbling down against Liverpool, as all three goals came from corner-routines. Mohamed Salah, not famed for his prowess on the receiving end of set pieces, was given free rein in the penalty area for the first two goals. His free header, well saved by Guaita, was turned in by Mané to open the scoring, as no defender appears to pick up his initial run. The second, with Jaïro Riedewald guilty of ball-watching, was stuck viciously beyond a helpless Guaita from close range.

The third goal, the proverbial salt in the wound, was a wonderfully struck volley by Naby Keïta will have delighted neutral fans, and MotD alike was more forgivable from a Palace perspective.

It is possible Liverpool just delivered on the day with both quality crosses and movement in the area, and this game was an outlier. However, as Patrick Vieira said in the post-match press conference, "you can't concede three goals on set pieces at Anfield if you want to take something from the game." 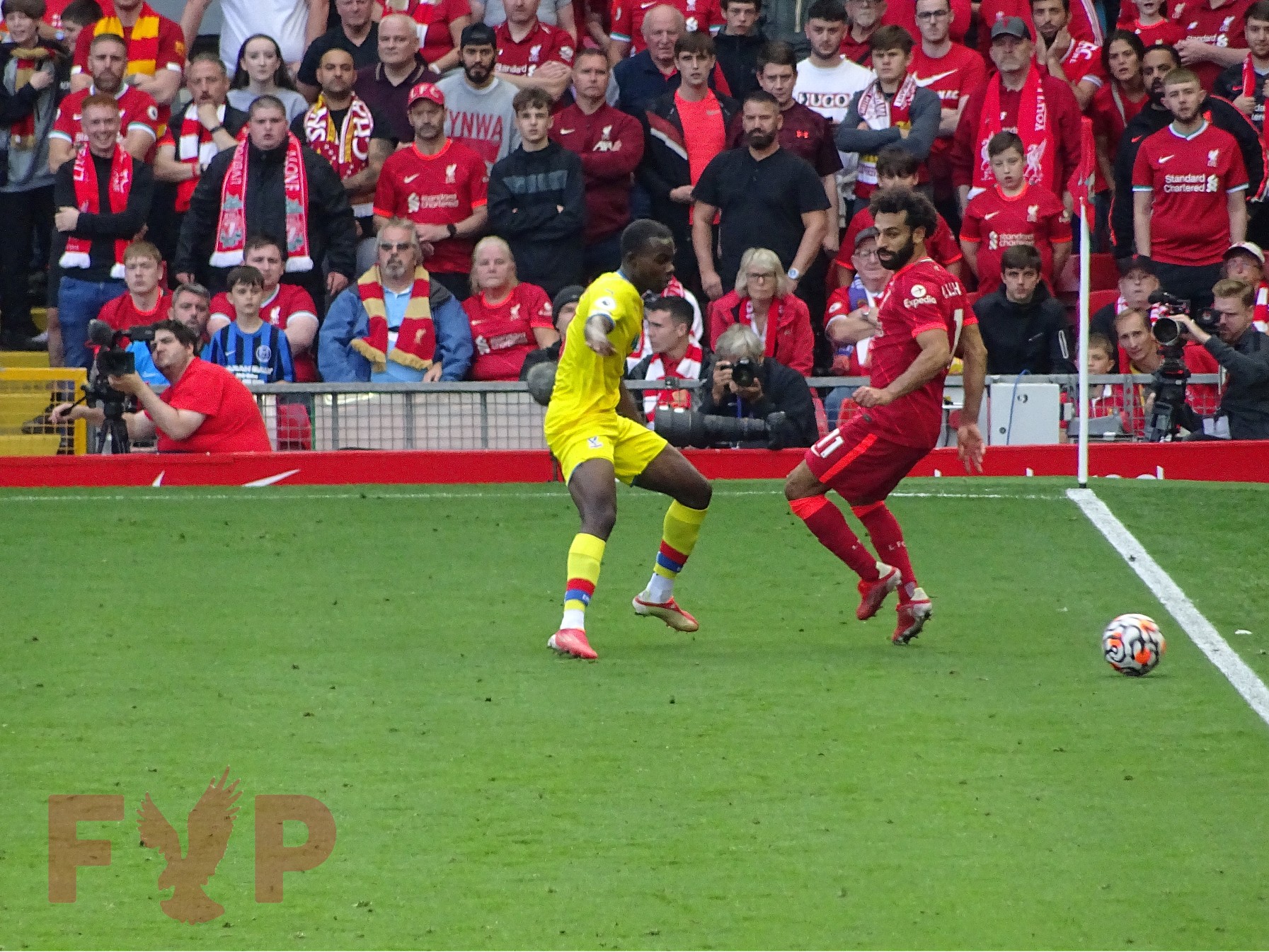 Reasons to be Cheerful

Unlike Tottenham, where absences and injuries had impacted their starting lineup, Liverpool fielded a strong team. With some rotation at the full-back position, Trent Alexander-Arnold was a notable absentee. The central defence saw Ibrahima Konaté making his debut, albeit a debut from a £36m player.

Against this strong unit, certain players impressed, notably Tyrick Mitchell. Rising to the challenge of one of the league's best wingers, Mitchell competed with Mo Salah throughout the game.

Palace's decision not to sign another natural left-back was an endorsement of faith in Mitchell's ability. As possibly the quickest player in Palace's team, his recovery speed is always an asset, but against Liverpool, he was strong in the challenge leading the team in combined tackles and interceptions. Growing in confidence on the ball, compared to the very start of the season, shows rapid progression.

Substitutes Odsonne Édouard and Michael Olise will leave fans wanting to see more, yet again. Édouard will wish to have his first opportunity back, to strike on the volley rather than trying to take a touch, but the ability shown to get in behind the pacey Liverpool defence is almost more important than the outcome.

Michael Olise, with Eze-Esque ease on the ball, had flashes of brilliance in his 7-minute cameo. Patrick Vieira will have a difficult task fitting all of his attacking players into a starting lineup, which is an excellent problem to have. 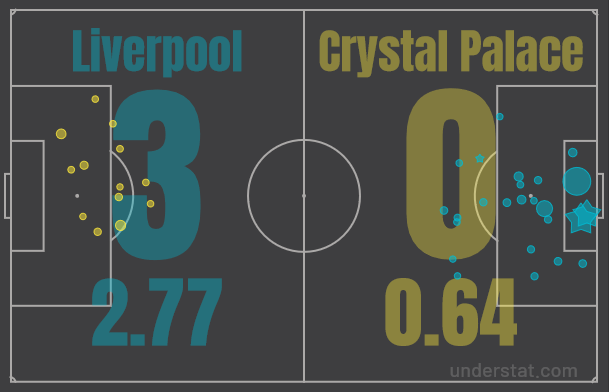 Based on the quality of chances in this game, Liverpool deserved the victory. As neither Zaha's early opportunity nor Édouard's late one registered as a shot, they aren't reflected statistically in these final figures.

Palace can take some solace in preventing Liverpool chances in open play, but Thiago's header followed by the inexplicable miss from Diogo Jota should have opened the scoring. The Keïta goal, a low percentage chance, went some way to balancing that out.

The other set-piece goals conceded, as featured above, were quality opportunities for Liverpool and not ones you want to give to such accomplished players.

From a Palace perspective, they mustered more shots at goal than in both of the Liverpool fixtures last season combined. The quality of chances wasn't always excellent, but the team continues to get bodies forward in numbers. 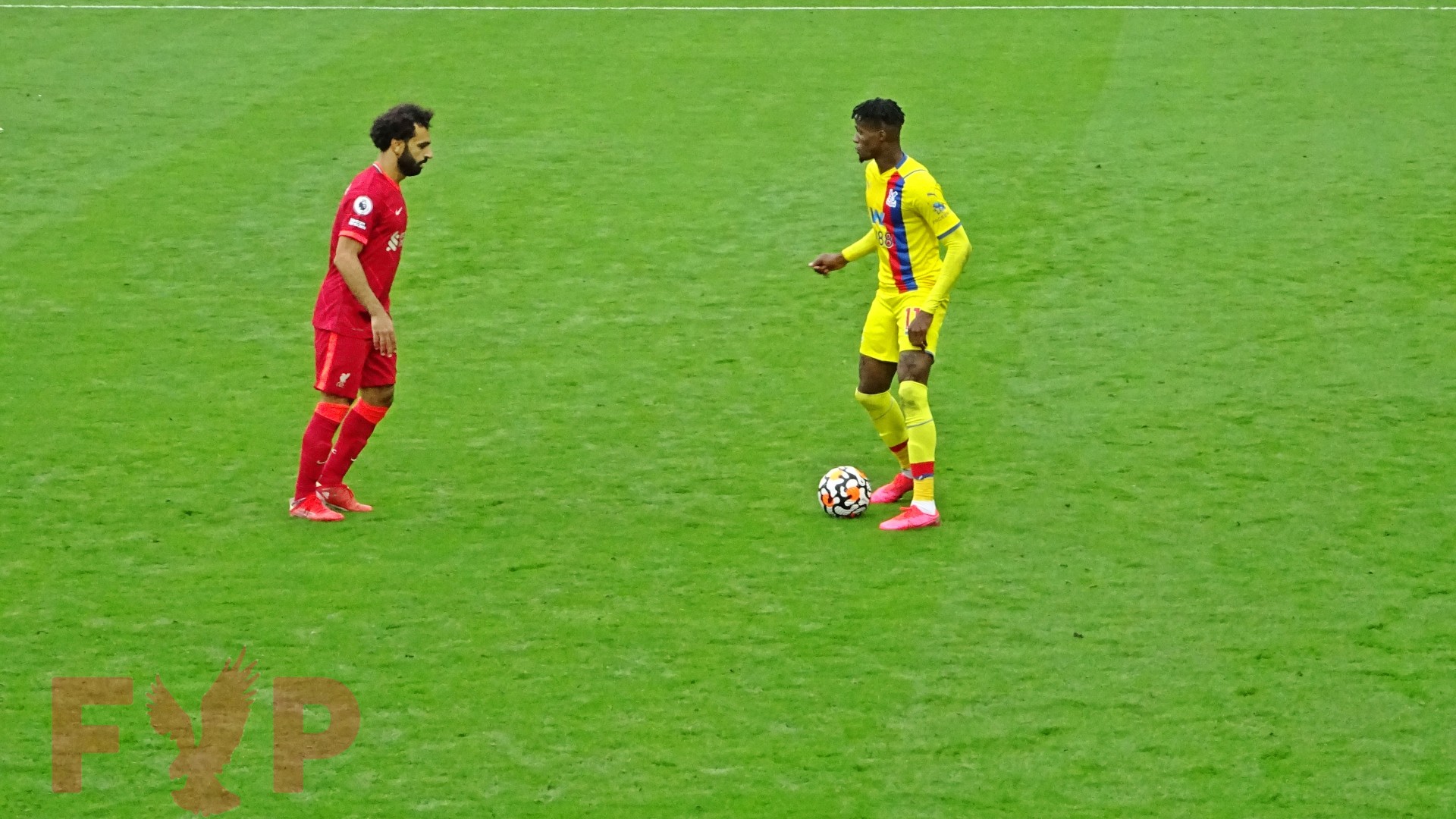 Patrick Vieira's introduction to the Crystal Palace-Brighton rivalry will take place under the lights at Selhurst on Monday Night Football.

Aside from Yves Bissouma, Brighton isn't renowned for offering the physical presence of some other Premier League teams. It would be logical to see Luka Milivojević or Will Hughes come into the midfield to add mobility and passing to the holding midfield role.

The aerial ability of Shane Duffy and Lewis Dunk will be a threat from set-pieces, especially given the shortcomings in the Liverpool game. That size, offset by a lack of pace, could be the perfect chance for Odsonne Edouard to make his first start.

The club will be happy with five points from the opening five fixtures, but this game will feel like a must-win contest, if not only for rivalry reasons.