A left-field transfer deal on the final day of the transfer window, Crystal Palace have signed 19-year-old Luke Plange from Derby County for an estimated £1 million. 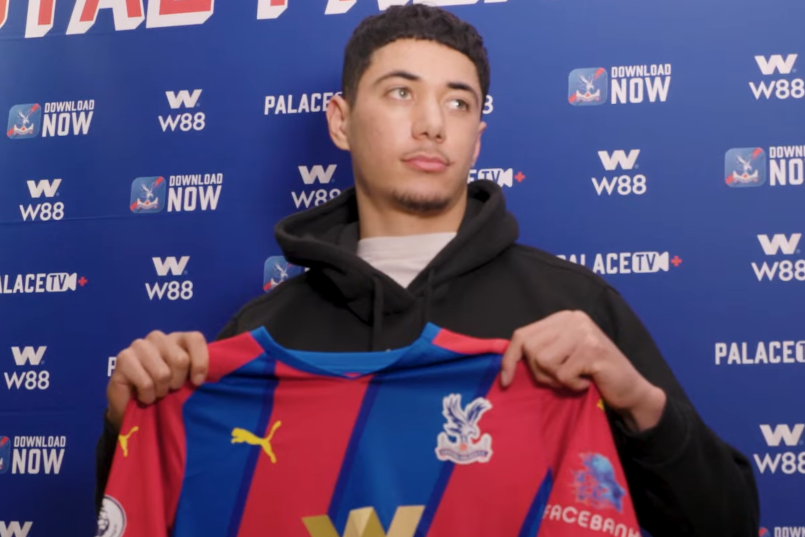 Plange, born in Kingston-upon-Thames, came through at the Arsenal academy, joining the club aged eight, before making a free-transfer move to Pride Park in March 2021.

His rise amongst the difficulties of Derby's administration and subsequent points deduction has been a recent bright spot for the club. Championship financial losses being what they are, the Plange sale will only cover a fraction of what the team will need to survive, but a welcome bonus nonetheless.

Plange's move to Derby has been the making of him as a player. Playing in the same U23 division as his former club, Plange's five goals in seven starts this season drove his call-up to the first team.

Crystal Palace had first-hand experience of him this season, as he scored in a 2-3 loss to Paddy McCarthy's side back in October.

That U23 output, coupled with the dire situation Derby that are in, turned Wayne Rooney's eyes to younger players. Having made his senior debut against Bristol City at the start of December, Plange followed up with a winning goal against Blackpool six days later.

Ending his time as a Derby player with three goals in his six starts, his 16th-minute goal in a 2-1 win away at Stoke at the turn of the year was his finest yet. 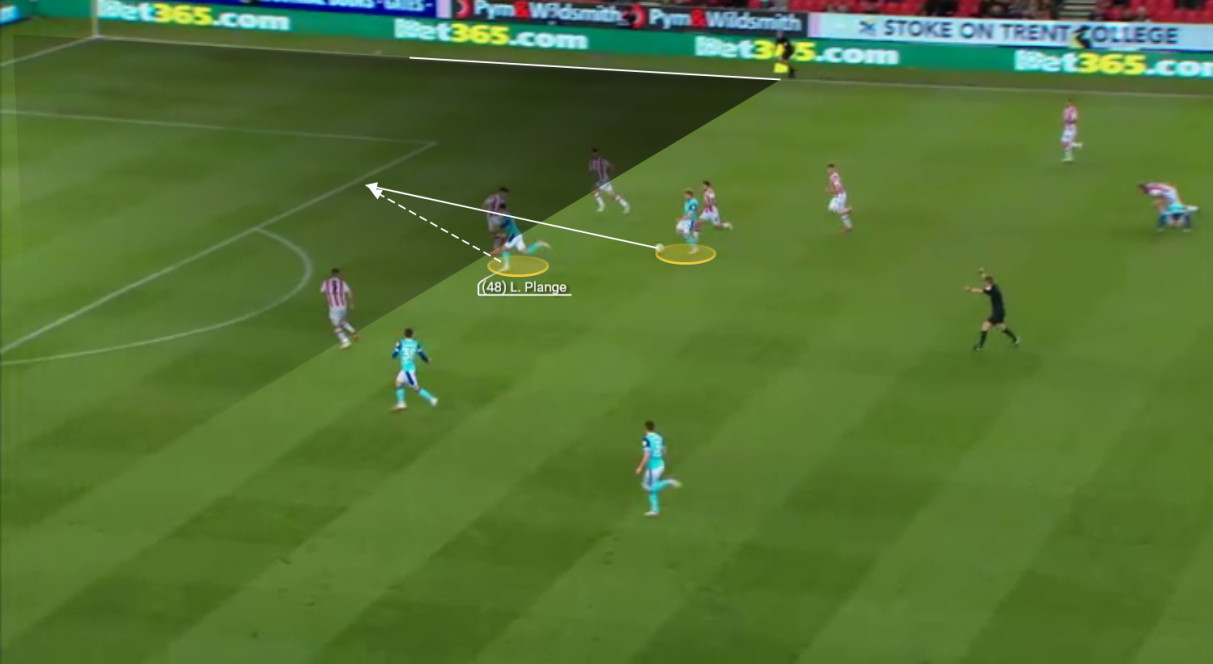 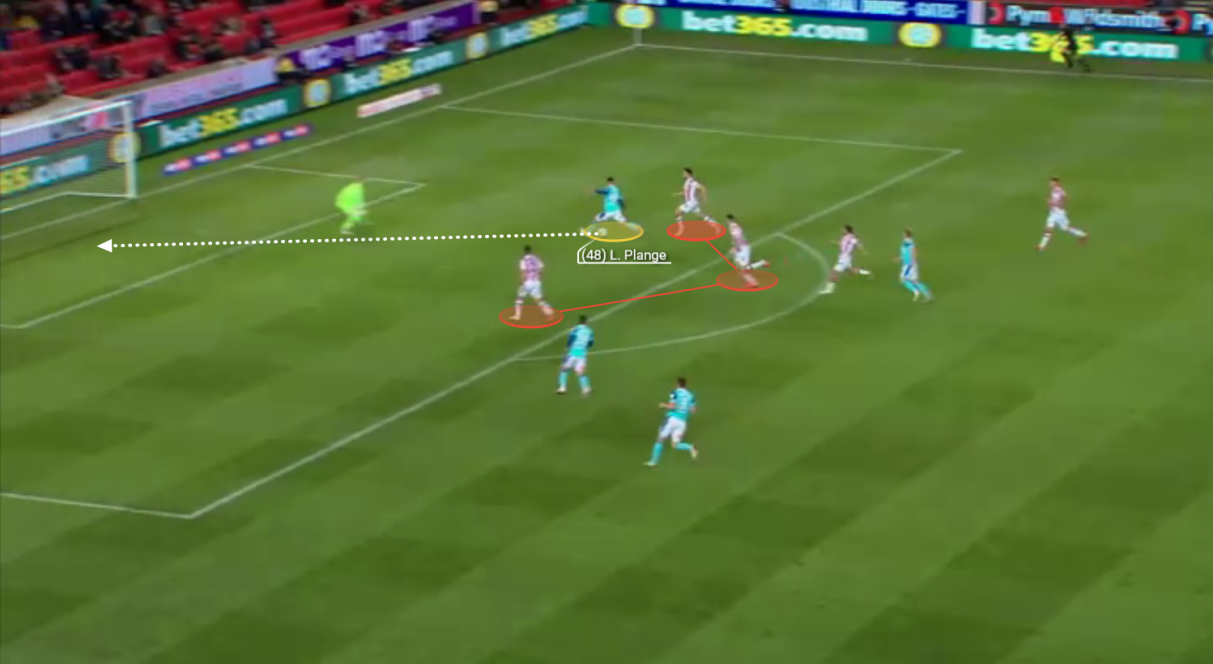 Timing his run to perfection, Plange slipped in behind the Stoke defenders, latching onto a perfectly weighted ball provided by Kamil Jóźwiak. Face-to-face with Adam Davies, Plange kept his composure to fire a low, right-footed effort past the Stoke goalkeeper, giving Derby a well-deserved lead. A classic poacher goal.

There are some encouraging signs from Plange's performances in his limited exposure to senior football. Again, using SmarterScout's tool to look at his output helps paint an early picture of him as a player. 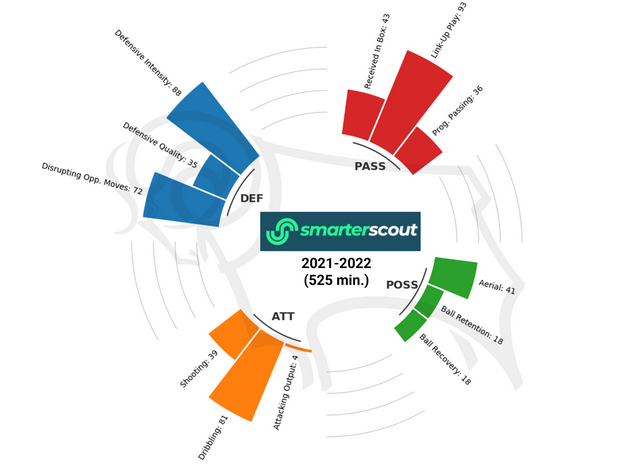 Plange has shown a fantastic work rate, discipline, and commitment to team play in his eight appearances so far. When required, he helps out in defence either by pro-actively defending from the front or dropping back to Derby's half.

Although his stature is not imposing, he is strong on his feet and can stand his ground against the massive Championship defenders. In addition, he can take on defenders, link up with his teammates, drift out wide, or, as exemplified above with his goal against Stoke, make intelligent runs in behind the defence.

His performance so far can be summed up in his own words: “I like to do it all.”

As a striker (and a young one at that), garnering high praise from Wayne Rooney is no mean feat. From a club perspective, Luke Plange offers a low-risk investment with a high upside. His loan move back to the Championship, where it is assumed he will continue to feature heavily, gives Palace a young loan player in the second tier, a very rare occurrence (the last being Sullay Kaikai).

The hope will be that Plange could eventually join the first-team striker ranks in years to come, saving the club an outlay on another attacking player.

In the meantime, as a fun prospect playing in the Championship, he will be someone we will be monitoring for the rest of the season.